(second note: This was a struggle. The race, yes, but this account as well. I'm not sure why, but it's difficult for me to make this interesting to anyone else, and possibly not even to me, once I've written it. The experience had an impact on me, but the telling seems to bog down in details that ... are a slog, just like the upwind leg of the race. It's realism at it's worst! )

Once we made the turn at the northern buoy, we swung back for 3 1/2mi of running downwind. This type of downwind run is what most of the experienced paddlers love, because it means less work and also holds 1the promise of some surfing in the wind-generated swells. But it was the downwind I'd been dreading all morning.

I always feel slightly out of control when running with the swells. I think it comes mostly from inexperience, with a dash of serious initial exposure back on Jan 2.

But once around the buoy I discovered that, hey, it's not so bad. I can handle the bumps, and now I'm not fighting into the wind. It feels like there's no wind, and I'm even starting to get warm. Off in the distance, past miles of Lake Washington water and the 520 and I-90 bridges, was Rainier. Ok, I can get used to this. Too bad I'm tired from the upwind stretch!

It helped me that the wind didn't have a lot of fetch over which to generate swells. That means that they were small, especially for the first 1/2 of the run.

I paddle, I start catching a few waves. I start wondering if I should take off my hat. I start looking south and wondering how damn far there was to go, because that upwind stretch had really taken it out of me.

We (the 4 OC1s) kept more or less together. The paddleboards were left behind. It felt fine, even good. I wasn't losing ground to anyone, and as far as I could tell, no one was coming screaming up behind me. (The smallness of the waves helped on that front too -- if there was a good surfer behind, they wouldn't have as much opportunity to catch me.) I saw some canoes still coming north, so there were some people behind me.

The downside was that I'd worn myself down slogging into the wind and began to feel it after about 2 miles downwind. One of the men moved out ahead of us. The other man and the woman stuck close to each other. I passed them. The woman passed me back. The other man did too. The waves were getting slightly bigger (but nothing like on 1/2/10) and I was surfing some of them! My bow buried in a bump ahead of me, but in a good way. It didn't feel like I was in danger of losing control.

But my exhaustion was starting to cost me. I didn't feel I had energy to expend trying to catch waves (which is a false economy because you get a lift from the waves and scoot forward, but it's hard to tell your body to gogogo! when you're tired and dehydrated).

The woman pulled ahead, but I saw her periodically pause and lift her paddle up, and that made me think that she was tiring and if I could keep close I might be able to catch her on the final 1/2 mile (when we would have the wind on our starboard beam). In retrospect, I think that yes, she was tired, but we all were, and that in fact she was riding waves well and taking small breaks to conserve energy. Who knew?!?

She continued to expand the gap between us and we approached the shore and the last turn I watched as first she and then the man made that final turn. And then I was around it too! 1/2 mile to go. But what a stretch!

Now the swells and wind were coming from our right, the water full of ugly lumps that I climbed up over and bashed down through, up and down, side to side, the backwash from wind across 5 miles of open water reflecting off the shore on the left and it was a freaking mess. Right when I was the most tired, the water was the most confused.

At this point my concern was to not make any bad mistakes due to exhaustion. I could finish the race and finish it without a huli, but I needed to stay focused.

I somehow passed the man, but the woman took an inside course and kept just ahead of me. I was gaining but never caught her as we pushed our way to the finish at the end of the pier.

She crossed over and then I did too, and I was done. We were done. The race was over and I was exhausted.

Right then I felt disappointed.

I'd felt pretty well trained and yet hadn't done as well as I had hoped, and I felt it was largely because I'd let the conditions get to me before the race. I anticipated problems that never came (the downwind stretch ended up being fine). I got unnerved. I was tentative at the start. And I felt that one of my few strong points, conditioning, hadn't come through for me. The race had kicked my butt!

In the lagoon beyond the finish line I chatted with the woman who'd come in ahead of me. When I told her "good race" she said "I figured something out about 1/2 way down. Figured out how to surf this boat." I said "I could tell." Then she told me her boat was only 3 weeks old and she was still getting used to it. I said it seemed like it was going to be a good fit for her. (Curiously, she apologized, which I told her was not necessary. Apologizing for coming in ahead of me? Not necessary, unless you do something to screw me up.)

Later, talking with other people, revelation! The race had kicked everyone's butt. People were remarking on how long it had been, how hard the upwind stretch was, how messy that last 1/2 mile was. When I mentioned to DougN that I'd been in survival mode for the first 1/2 mile, he said that the conditions were bad. You mean it hadn't just been me?!? (Which suggests something about my self-centered point of view. It's all about me, right?)

It was a good experience and I'm glad I did it. There were good as well as some not-so-good aspects. Lessons learned and more time in the boat. And ultimately, I think it boils down to on-the-water experience.

On the downside:
On the upside:
I don't feel the sense of disappointment I had after Silverdale, especially as I've processed the experience. A big part of this was learning that virtually everyone thought the race a real challenging one. Another piece of it is looking back and realizing that, for my 3rd OC1 race, I didn't do too badly. I'm glad for the additional experience and the chance to race, and I'm especially grateful for M's willingness to cover things at home so I can be gone most all day on one of our two weekend days. 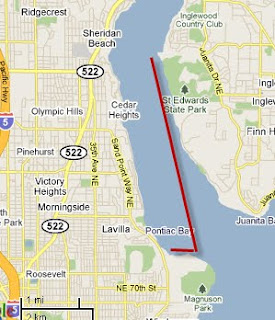 The race course (roughly)
we went right, up, down, left
(bummer about my GPS not being on...)
Now on to the summer race series. Sprints and long OC6 races, ultimately culminating in the Na Pali race in August. Imua!

edit: image from the FB page for the race (looks like I got it close): 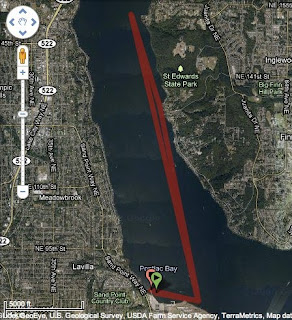 I think I'm still sore from this race. It was a great effort and you totally rocked it! Way to go!
-M

Congrats! Great write up, and contrary to your advertisement, I found it quite interesting.

for what it's worth, here are a few mantras i repeat to myself when facing races in challenging conditions:

1. "These conditions are gonna get to someone today, but that's not gonna be me."

A bit dorky, but repeating simple motivational mantras before and during a race really helps...

You are the dragon slayer!