I took the girls down to Olympia to visit with their cousins (oh yeah, and with my sister and her husband). Cousin Maggie (who is not "blond Maggie," mother of Ainslie) was down from college and offered to take the girls riding on her horse, Ohso. Hard to imagine anything better than this, isn't it?

Down to Olympia and after a quick stop at the cousins, everyone went to the barn. Where we actually SAW real live horses. In person. And got to brush them. And pet them. And smell real live horse poop. In person.(K and I even took a "field trip" out to a steaming pile of Ohso poop while L was riding, just so she could look and ask questions, the answers to which she fully well knows!). 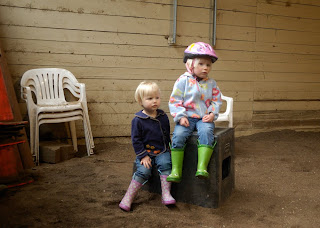 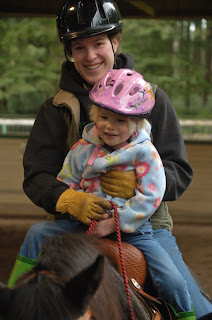 K (Stevie)
under the able care of cousin Maggie
K did two circuits around the ring on Ohso, riding in front of Maggie as a friend of Maggie's led them (Ohso had been somewhat surprised that 1) we were loading him up with a second rider, and 2) he was going to be forced to plod around the ring).

Ohso is a mustang, and somewhat headstrong. I suspect he wanted to just get out and stretch his legs and runrunrun. In fact, after the girls had their turns, Maggie took he out to show them what trotting looks like, and Ohso promptly cantered around the ring, obviously feeling Spring in the cold damp air.

Then it was L's turn. We got her on and she did two turns around the ring as well: 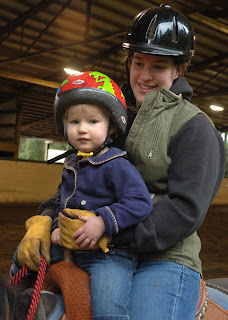 Riding into the morning dew...
(because nothing says "Saddle Club" like
a red dinosaur bike helmet!)
While K and I examined poop. (I failed to take a picture of the poop, but I can assure you it was exam-worthy for a city girl.)

Then K wanted another turn, which she got, and then L wanted/got the same, and it was quickly obvious that we would be able to keep Maggie doing this all day long. But we didn't. The girls got off and watched while Maggie rode Ohso for a few minutes and then we all led Ohso back to the stalls where the girls helped groom him and untack him and carry important things like bridles and brushes and hoof picks.

All in all, it was a day made in heaven. Especially as after this we went back to the cousins' house and ate and ate and ate until it was time to hit the road. L fell asleep shortly after leaving Olympia, but K was engrossed in 2 tack catalogs that Maggie had passed along, and only fell asleep after finishing both about the time we passed through Tacoma.