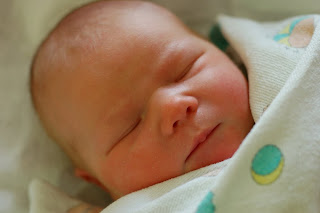 Yup, you were that late. So late, in fact, that they finally decided to induce you. So on the 22nd we went for a long, long walk, and on the 23rd we went to the hospital where they started the process and sent us home. For mexican food. And ....still, nothing....

We finally went to bed. I went to sleep. Apparently M started feeling contractions at some point. I say "apparently" because I was asleep, banking my rest because I was about to become a father! And it's important to be rested, right?

At some point early in the morning I woke up and realized M was sitting up next to me, silent tears streaming down her face.

The maternity wing was crowded at that point, so much so that we'd been told that they weren't going to admit us until M was truly in labor. And we'd learned all the various stages and figured we weren't yet in true labor, but M was hurting and we figured, the hell with it! and went on it.

Where they promptly admitted us. And M lay around in pain until a kindly experienced nurse came by to check (1cm dilated, no effacement) and said: "You can do several things at this point -- you can get in the tub, or have a shot to take some of the edge off, or you can tough it out." After this last one she muttered just loud enough for us to hear, "Though I don't know why anyone would want to do that." Then she left us alone to decide.

That helped, though you (K) didn't come for another 14 hours or so.

We didn't know if you were a boy or a girl, so all the nurses were excited (this is relatively rare these days, apparently), and when you did come, the doctor said: "Does the father want to say what the baby is?" and I choked! I didn't expect to have to do anything! And I didn't want to make a mistake. I had to double-check to make sure, and then I managed to say "Girl. It's a girl."

They laid you on your momma's chest to let you get used to being in the world and to let us start getting used to you. I'm still now "used" to you, and that's a good thing. You keep me on my toes and keep my alert, and I love being your dad. It's been a wonderful first 4 years, and we're looking forward to many, many more! 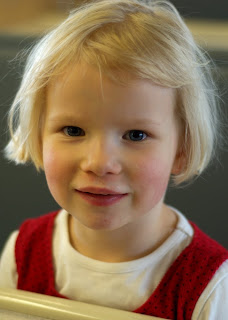 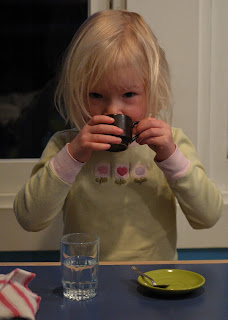 This was so sweet it made me teary-eyed. It seems like only yesterday that little K was born. Happy birthday!