(This is a long and rather boring and rather self-congratulatory post I've written entirely for myself. Feel free to quietly close your browser and come back another time. I won't hold it against you.)

Last night I had a great OC2 workout with DougM, and I was especially pleased because I'd recently gone back to reread some of my very first paddling posts and the contrast between then and now makes me happy. I'm approaching a year of paddling, and feel like I've come a long way, both in terms of conditioning and with respect to technique. (The latter seems the more critical of the two.) The other thing I've got now is some "water time," time spent sitting in a canoe and getting used to the feel of it in various conditions, in various boats, with various paddlers. I'm the first to admit that 1 year of paddling isn't a ton, but it's a lot more than I'd done last April.

Doug is a paddler I respect and admire and look to for guidance and instruction and if you'd told me last April that I would be able to get in a 2-man canoe with a paddler like him and keep up (more or less) for 12 hard miles, I would have thought you were dreaming. (It would have been a nice dream, but not realistic.) And yet, that's what I managed last night.

The rest of the paddlers were either paddling the OC6 up to Sandpoint for loading on the trailer for the Rusty Iron race this Saturday (the men), or getting in a moderate workout in preparation for the race (the women). That left Doug and me to do a harder workout (neither of us is racing this weekend).

I'm always a bit nervous when paddling with either DougM or DougN because of their experience and ability, but they have been encouraging and seem willing to have me along. When we're all in one-man canoes (OC1s), they tend to pull ahead and then circle back around to keep more or less even with me. When I'm in an OC2 with one of them, I just do my best to not cause too much trouble, and I hold on for the ride.

The first couple of times I'd paddled with DougM I sat in the back seat and he stroked and steered. This time, because the steering was just from the back, I sat in front. Which meant that I'd be setting the pace rather than just trying to keep up. It makes a difference, though that may not be obvious if you haven't tried both seats.

Our original plan was to head to I-90, but as we cruised out toward the cut and Lake Washington we discovered the wind was from the north, so heading south to I-90 wasn't as appealing. I voted to go north so we'd be fighting the wind for our first 1/2 and then have it behind us for the paddle home.

Doug's response: "Ok, then we're going to try and catch those guys!" Meaning the men who'd headed north to deliver the canoe to Sandpoint.

And we tried. We paddled hard and continuously for 6 miles, going all the way to the swimming platform without a break. And we didn't catch the men's boat, but we got close enough (a mile? 1 1/2 miles?) to see them turn the "dog park" corner and head west toward Sandpoint.

We were working into the wind and Doug said early to paddle "long and hard, it's going to be a grind" and that's what we did. We ground it out, averaging 7mph the whole way (actually, averaging that for the entire 12 mile paddle, which this morning feels pretty damn good). I sometimes managed to get into a groove and just paddle, and other times it was a struggle with each stroke. But I never felt like I was going to collapse or need to quit. (In case you don't understand, that felt good!) 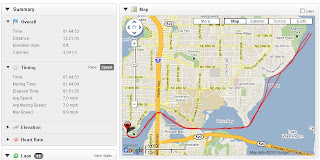 Our track
(inserted to break up the reading monotony)
At the 6mi mark we paused, had some water, some deep breaths, and then turned around and started back. We'd done the first 6mi in 52 minutes, going into the wind. Doug seemed quite pleased and said "The scary thing is, we should be even faster on the way back. Not a lot, but some." (One thing I like about paddling with Doug is he's enthusiastic and positive. When I'm working hard, I always feel like we've done well because he tends to be encouraging at the end.)

Back into the groove of stroke after stroke after stroke. I got so I wasn't worrying about how I was doing and was just doing. Partly that was me getting tired, but partly it was me feeling like I was keeping up a regular and decent pace. Twice Doug had me shorten my stroke to see how it affected our boat. He said (later) that sometimes that can speed things up.

The wind switched on us so we were paddling into it going south, but not for long, and not very strong. Mostly we either had a slight wind behind us, or very little wind. We crossed a couple of larger boat wakes from far away but heading in the wrong direction (no surfing them), and we cruised down the lake shore to Webster's Point and turned west into the setting sun, heading for Montlake.

Then through the cut and digging for the University Bridge. Under the bridge and then Doug said "last mile, push it" and we hammered out the final mile back around Gas Works Park to the Harbor Patrol site where the men were just back from loading the OC6 on the trailer.

Our speed
(inserted because I can)
And one more thing I'm pleased about: this was really the first long, uninterrupted paddle I've done since... well, since the last winter series race, and the first with at least one other paddler since last year's Ruston Way race. And it felt good. I didn't hit a wall!

That matters because I'm anticipating the upcoming OC6 race season, curious about how I'll do in the longer "iron" races and especially about how I'll do in our August Na Pali Challenge race, during which the men's and women's crews will be swapping out every 30 minutes. I want to be prepared and ready to give fully.
Posted by pvz at 10:52 PM

You may have been happy on the inside, but you sure looked beat on the outside. The good kind of beat, but beat none the less. Glad it was a good workout for you.

The women's workout was a bit longer and harder than we anticipated.