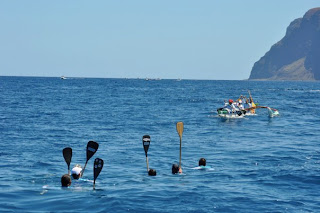 Somewhere along the Na Pali coast
(change #4 for the men)
This is one of my favorite photos of the 8/14 Na Pali Challenge race (taken by Molly Altman, thanks Molly!).

This is a change-out, about to happen. We've jumped in off the escort boat into the water in reverse seat order (#6 in first, then #5....) and are now waiting in the water with paddles up so Sabine can see us and line up appropriately.

I'm fairly sure this is change #4 for the men, which would mean it's change #7 for the whole team, but this is just a theory based on the fact that I'm lined up immediately behind Matt who'll be in #1.

What I love about this picture is that it's unusual. Rather than a typical "canoe in the waves" photo, it's unexpected and somewhat goofy, with those paddle blades waving in the air. And it's a picture of all 12 of the paddlers (though Rob is hidden behind me... his paddle is visible at least). I'm wearing the white hat.
Posted by pvz at 4:14 AM