(note: this is primarily about pre-race time) 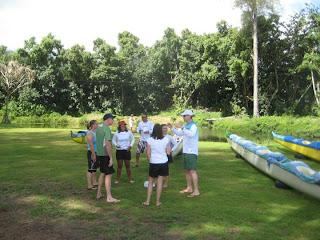 Talking Story at Kaiola CC beach
(waiting for our canoe - Friday, 8/13)
As I stood waiting for my bus in the cold gray shadow of the West Seattle Bridge on Monday morning at 5am, I thought about the contrast with where I'd been just a week ago: sitting on Mom's deck as the sky lightened and the ocean came into view, the occasional honu (turtle) popping its head up out of the water.

And just a couple of days before that (Saturday), I was up before 5a in our condo at Princeville, cooking oatmeal and drinking coffee before heading down to the beach at Hanalei Bay for the start of the canoe race. I was nervous, excited, and ready to paddle!

We were supposed to have our borrowed canoe available to practice in at 9a on Friday morning, but it turned out it wouldn't be in Hanalei until that afternoon, so after waiting an hour or so, we borrowed another canoe from one of the clubs hosting the race (Namolokama). Not an ideal situation (we would have preferred to test out the canoe we were actually racing in), but you gotta go with the flow sometimes.

There were extenuating circumstances (there are always extenuating circumstances), including a massive funeral that morning in Hanalei that happened to be for a 40-something woman who'd been one of the Hanalei coaches. I think that threw everything else canoe- and uncanoe-related into disarray. The race also seemed a little disorganized, with our escort boat not reserved as expected (Sabine had to run around on Thursday sorting that out). "I'm livin' on easy...."

The men went out for the first paddle in the borrowed canoe, coming out of the river and running up onto the sandy bottom off the beach before really getting going. There was a small swell with a couple of folks out surfing, but not really much serious surf. Hanalei Bay is a north shore bay, so it primarily breaks in the winter.

Dolphins surfaced ahead of us as we paddled out toward the wind line. There were whitecaps ahead too, and we quickly cruised into the chop and the wind.

DougM took us out into it and along the coast for 18 minutes, heading west toward the point near which we'd be making our first change. The wind was strong but at our backs, and we tried to get used to the lumpy conditions. Starting to feel the Hawaiian waters was a big part of this test run. We'd be paddling with the wind, surfing down the swells as we cruised along the coast line on Saturday.

(During the race itself, this first part would be the leg the women would paddle. They were starting the race and we'd be in the chase boat, ready to switch with them after 30 minutes.)

After 18 minutes we turned back, and Matt (in 1) and I (2) promptly got a lap full of Hawaiian ocean. Welcome to Kauai!

This concerned me a bit - we'd come quite a distance and if we were getting regular dollops of water, it would be hard work to make any headway. Realistically, we should have had a spray skirt on, but we didn't. Behind us Garrett and Rob discussed bailing. I tried to focus on paddling, but was disconcerted by the bumpy water. Ama!? Incoming!! It definitely wasn't like paddling on Lake Washington.

We realized that it was going to take some time to paddle back into the shelter of Hanalei Bay where the women were waiting on the beach for their turn. There wasn't anything to do but to dig in and claw our way back.

After that first wave we didn't get much else in the boat up front, and we slowly fought into the wind, making foot-by-foot progress (I noted this against the beaches we were moving past). I started to relax just a little, feeling that we were going to manage to get there without a huli. Behind me Garrett and/or Rob bailed now and then. Later I learned they were getting regular water in over the gunnel, even though the canoe had high sides (which Garrett said made all the difference in those conditions).

We gained ground toward the bay, pushing up and over wind swells, and last slipped into the wind shadow and calmer seas again. We cruised on toward the pier and onto the sand and after a total of 48 minutes (18 down, 30 back) we delivered the canoe to the women waiting on the beach.

It wasn't a particularly satisfying paddle for me. I'd found myself very conscious of the lumpy water and the wind, too nervous to concentrate on my job (providing power to move the canoe forward and to give DougM the ability to steer). Others seemed to have enjoyed it though, so I think I was in the minority. The water was warm and I loved that as well as the saltiness of it, but the conditions definitely got into my head. 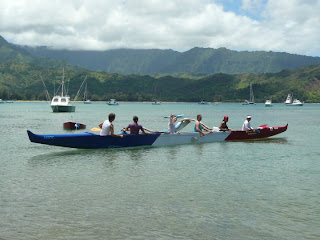 The wahine, starting their practice run
(Hanalei Bay, Friday, 8/13)
The women paddled for 30 or 40 minutes while we hung out, and then we returned the canoe and made plans for the afternoon: lunch, shopping, a brief rest, then rigging our borrowed canoe at 4pm. Those were the plans. In reality, we waited over an hour for a mediocre meal at Tropical Taco, then had just enough time to shop for a group dinner (I bought some Ahi at the fish store to grill at Sabine/LeAnn's), drop the groceries off, and get back to the beach to rig.

We went by the bay to deliver stuff to the escort boat for the race the next day (DougM and DougN paddled the stuff out to the boat in a 4-man surfing canoe), and then on to the Kaiola Canoe Club beach where we waited some more for the canoe. Time to talk story, enjoy the warm air and the tradewinds, and be grateful we weren't waiting anywhere else in the world. If you've got to cool your heels, there's no place like the country in Hawaii!

The canoe finally arrived some time after 4pm, at which point we unrigged and rerigged the ama, slipped on the spray skirts (nice new ones), and finally got ready to paddle over to the beach in front of Pavilions on Hanalei Bay. That's where the women would be starting at 8am the next morning. Jocelyn (Buttercup) joined the men (minus DougN) on this "delivery" paddle, and though it was getting dark (it was after 6p by the time we were in the boat) DougM took us through a couple of upwind/downwind legs to see how the canoe felt. This time I was in 1 and the paddle felt better to me than our initial paddle. Having the spray skirt helped my mental state, and this time we didn't ever get out into the wind line.

A shower later, we went to Sabine/LeAnn's to grill and eat (tons of food) and talk (briefly), before heading to our various condos/houses to sleep. I think we got to bed around 9.30p. I didn't sleep well, what with the anticipation and excitement.

I'll write more about the race itself, but here's a picture to whet your appetites: 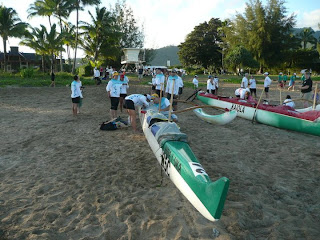 Hanalei Bay, prerace
(doing last minute stuff, like waxing the
canoe bottom for traction, Saturday, 8/14)
Posted by pvz at 4:07 AM