Last night I went out with "the Dougs" for a long paddle. 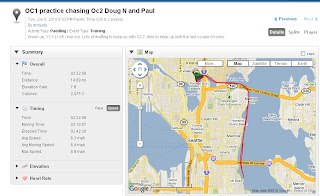 DougN (just back from Europe) and I took his OC2, while DougM went in DougN's OC1. We headed south in calm weather, and I felt pretty good as we started out.

DougM had the hard challenge: he needed to keep up with us. 1 person paddling alone is generally not as fast as 2 people paddling together.

But, he managed. Managed very well.

Neither DougN nor I had our GPS units, so we were reliant on DougM's. Our set was 1 mile on/ 1 minute off.

Early on, DougM said we were cruising. He was averaging 6.9mph and we were going a bit faster than that. I felt good, the boat felt like we were powering it nicely. DougM managed to keep up by drafting behind us, and because we would occasionally make a course deviation that added some distance to our paddle while DougM continued on straight.

The water was smooth and made for nice paddling. I enjoy the times when it's possible to sense the speed you're going because you can feel the hull passing over/through the water. If there are any swells or chop it confuses the smoothness of the ride and makes it more difficult to pick up any sense of speed, even if you are going quickly.

We got to I90 and beyond, but not all the way down to Stan Sayres. We turned around after 6 1mile segments (DougM's gps said we'd done 7.4, including warmup). I wasn't sorry to be turning back.

Luckily, the weather held, the wind nonexistent, the only swells being those coming from distant passing boats. There were some rain showers off in the foothills to our right, and DougN saw lightning there as well. I was focused on staying on the boat and staying regular with my stroke.

Later, DougM was doing a better job at staying with us, and I was getting tired. We paddled and rested and paddled and the 520 bridge came closer and then we were under it and headed west at last.

I didn't realize just how tired I was until we got back to the beach and I felt almost 100% wiped out. It was all I could do to help pack away the OC2, get my stuff, pull off the neoprene and pull on my clothes.... I felt more exhausted than I have in some time, and it was a bit confusing. DougM and I have done several OC2 workouts, including 2 down to Stan Sayres, and in both we'd kept up an nice even 6.9mph pace. Even during the 2 week period when I felt tired all the time, I was able to get in good workouts on the water, but this time.... Well, it wasn't that we hadn't had a good workout. It was how I felt after that workout.

Then it occurred to me: Food. I didn't have any before the workout.

I'm now coming to paddle from work, rather than going home first. And that means I'm not getting the opportunity to fuel up (on leftover oatmeal, cold pesto pasta, pizza.... whatever is lying around). So last night I was doing my workout on a peanut butter sandwich eaten at 3p. We started paddling around 6p and finished around 8.30p. My tank was empty.

You can tell I wasn't producing by looking at the decreasing speeds for our sets (from DougM's gps -- he was tracking right behind us for the most part, so these apply): 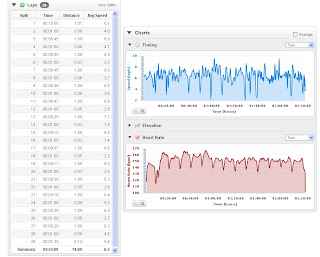