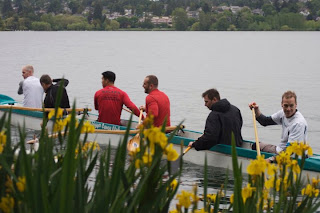 Heading out to do our race
(and looking surprisingly calm,
given that I felt like throwing up from nerves!)
On the other hand, this may be after
the race -- everyone seems to be backpaddling....

A quick post about our sprint regatta last weekend. It was a raining, cold, dreary Saturday on Memorial Day Weekend, and the big news for this one, at least for me, was that I actually steered a race. What was I thinking? Or more accurately, what was Melissa thinking?!?

(She said afterwards that she's got me figured out and knew I wasn't going to volunteer but needed a push, and I acknowledged that she probably did and was right, at which point I heard Sabine chuckle off to the side.)

It went... ok. We didn't win, but we didn't finish last, and everyone was supportive and encouraging, so as a first try it was a relatively painless one. I managed to keep the canoe online mostly. The lanes were pretty irregular, and the canoe tended to veer left, though I don't know if that was due to my steering or to it being unbalanced. But I did it, and we didn't huli, and I'll admit it felt satisfying afterward.

On the other hand, the 5 other paddlers got virtually no help from me. Good steersmen can paddle a fair amount, contributing to the forward progress of the canoe. "Less good" ones are busy using their paddle to keep the canoe going roughly in the right direction, and thus serving both as a dead weight and as a drag-inducing component (every time you use a paddle to steer, you create drag).

I've only steered a canoe a couple of times, once being early this year. That was in fact the only time I've steered this year.

The crew was filled primarily with men from Columbia River Outrigger Canoe Club, plus one new man who's joining SOCC. This was a novice men's race, 500 meters (that's important because it means I didn't have to do any turns!). They probably didn't know what they were getting into!

Luckily Melissa didn't tell me until well into the day that I was going to steer, so I had less time to stress and freak out.

Also luckily someone from CROCC got a few photos for proof (I don't think that's why he was taking them, but that's what matters to me): 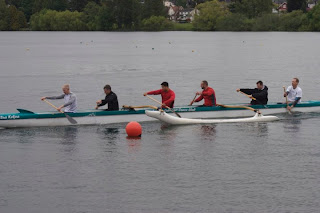 Heading out to the starting line
(note that I'm "poking" my paddle
not paddling!) 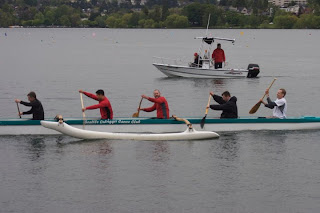 A (probably) panicked correction
(moving the paddle to the right side
to over-correct my previous over-correction)
Posted by pvz at 5:11 AM

Yay! You steered your first race, you'll never have a first sprint race again! And you really don't give yourself enough credit. The guys said you did an awesome job. And while you believe you are over-correcting for an over-correction I believe you were just making sure it was a straight line. I takes work, ya know! If it makes you feel any better we'll probably have Rob steer at Silver Lake.

In the "Hot Seat." I like it! Nice job. Sorry to miss the regatta. I had to get in a long training run (WS is on 6/26) and then we were headed out to Whidbey for the weekend. Keep me posted on upcoming races. Would love to check one out.