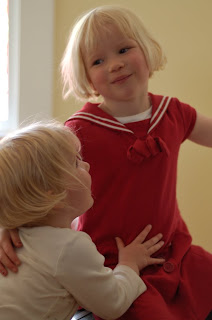 Sisters
(calm before some storm)
I never planned on having kids. Never thought I'd want them. Never considered them necessary. I didn't need them. But there was one unrealistic scenario I carried in my imagination, in case I ever did have kids:

I'd sit on the back deck steps with the Sunday comics, my daughter sitting between my legs, and we'd be reading the cartoons together. In the sun.

Not sure where this notion came from, but when I think about it, the convergence of things necessary to make it happen seem highly unlikely:
Yet they're all there in my current life. I've got every one of them in place. (Except the sunny Sunday. That's always touch and go around here, mostly go lately.) And what the hell! K actually wants me to read the comics to her. You see, I'm the only one in the house who looks at them. M thinks they're a waste of time. If she could get the paper without the comics, she probably would. It'd be more environmentally sound, for one thing.

Anyway, my fantasy is in reach, I can realize this long-held daydream!

So here's the problem: When I look at the funnies with an eye toward reading them to K, I realize that M is right -- the comics suck. They're not funny. They're badly written and frequently don't make any sense. They. Are. Stupid.

Which means that either:
In a phrase, I'm up a creek.

Except, luckily, there's a 3rd option. Luckily I married M. Here's what she came up with (and remember, she doesn't even like to look at the comics!):
I've really got to give M credit. She did this on the fly, creating a story about a baby that was hungry and needed a diaper change (the actual storyline involved a conversation between two women about why husbands are never aware of all the things that need doing around the house, I think. I don't know. I'm a husband).

Problem solved! At least as long as we're willing to come up with some creative story lines.

New problem: You have to remember what you said the last time you "read" the comics to the girls, because they tend to bring those pages back to you later that day, or the next day, or even well into the week, and want to hear the story again. And they remember the crazy things you told them!

Let's just say that I'm still learning my way around this issue.
Posted by pvz at 4:19 AM