Tuesday was the 1st anniversary of my first paddling post and in honor of that I'm going to do another paddling post right now, even though I've already done today's post.

Tuesday night I did an awesome workout with DougM in the club OC2. And by "awesome" I don't mean so much that I performed awesomely as I mean that the workout was long and nearly continuous and it kicked my butt and I'm stiff this morning and I'm thrilled with how it went. And, looking back at that original post, pleased with my progress over the year.

The last few weeks I've done a fair amount of OC2 paddles with DougM for various reasons (DougN is out of town, not enough folks showed up last Thursday....). Last week Tuesday we did an OC2 workout (w/ DougN in his OC1) in choppy water and windy conditions, heading toward but not reaching I90. That was 11.65m in 1h50m. And then Thursday we did a workout in very strong southwest winds which meant we stuck to Lake Union and the ship canal and still got in 13 miles in just over 2 hours.

So last week was windy, but Tuesday afternoon it was calm, and as I left I had this exchange with M and the girls:

The water was smooth and there were few boats out and we warmed up to Portage Bay before starting our first 30 minute segment. And then we paddled. And paddled. Through the cut. East to the 520 bridge. South. Past kayakers and a man sailing in a cat boat. Moving through the water at a regular pace.

My back hurt on the right side, reminding me of the major pain I'd had there on Thursday, a result of compensating for the very choppy conditions (protecting the ama to prevent a huli). I tried to rotate as much as possible and focused on staying in sync with Doug and on getting a good catch at the start of my stroke. My body felt somewhat tight, but we were moving.

At some point we reached our first 1min break and I drank water. And then we started again and cruised past Leschi and the west shore, approaching I90 and going under it, past it, continuing south. We kept going toward the Y dock. And past the Y dock, heading for Stan Sayres Park. Still in our second 30 minute piece. At the park we rounded a buoy there and started north again and were a couple minutes into it before that 30 ended and we got our next 1 minute rest. We'd done 7+ miles in 1h13m.

When we started again I was feeling pretty good. My back isn't what you'd call "flexible" and it takes a good deal of time for me to start feeling warmed up. But I was finally feeling stretched, no longer hurting on the right as I paddled left. I yelled up that I was finally "warmed up" and Doug laughed. Warmed up after 7 miles. And we paddled.

Past the cat boat again, past 2 dragon boats, both of which we went near and exchanged hellos with. Then later past another. And past the 2 kayakers we'd passed going south. Approaching 520 again, pulling hard, trying to stay in sync with Doug. No wakes, no swells to ride, but no chop or confused water either.

One last break before the final 30 minutes.

Then it was a push west toward the cut and through the cut into Portage Bay, almost to the University Bridge before we were done with that last segment! Not quite under the bridge, but less than 50 feet from it.

I was exhausted, but in the best possible way. It felt like we'd been moving pretty well. And I liked that I'd been able to keep strong the entire time. I focused on my stroke technique and on pushing off my legs as I pulled the canoe up to each planted paddle.

We paddled back to the beach where I stumbled ashore as we carried the canoe back to the cradle. 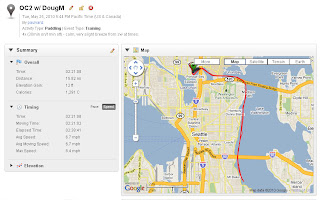 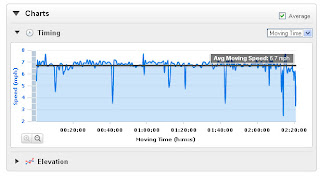 Average speed: 6.7mph
(new goal: a workout averaging 7mph)
I'm fairly certain this was the longest paddle I've ever done. Certainly the longest straight paddle. I did the SSP Changeout race last year, but that was about 24 miles and I figure I only paddled 1/2 of that. So 15+ miles feels significant.
Posted by pvz at 9:51 PM

Ok, you are no long allowed to get whiny when you haven't been on the water in a week, saying you have lost all your fitness! That workout proves it. I am super stoked that you are doing such distances and in an OC2, no less. Makes your not doing Gibsons that much more sad. :(