A couple weekends ago the girls got into a wrestling match that lasted for 20 minutes without any tears. Which was amazing. And great.

I don't do so well with really dainty or delicate girls and I think it's good for the girls to sometimes get a bit more physical in play. I want them to learn what they are capable of physically and how far they can push without going too far (dream on daddy!).

There are different kinds of hurts, and experiencing at least the more benign types is not a bad thing. I'd like to imagine my daughters will know how to push themselves in a marathon or on a snowboard or in a canoe. I want them to know how to physically hurt in the good sense, to be able to challenge their perceived limits.

Being tired and lazy and the only parent on duty, I just let them go at it, imagining that this was something close to what it might be like if we had had 2 boys. I kept waiting for one of them to hurt or be hurt, and for the whole thing to come crashing down around us, requiring multiple hugs and kisses and all that other 2-girl-parenting stuff.* But it never did. They just kept at it until M got home. (I think I managed to get off the couch before she came in the door.**)

Irrelevant aside:
I was reminded out of the blue how, when I was in grade school at Punahou, a few of us used to play at "wrestling." And by that I don't mean any whimpy Olympic Greco-Roman sense. I mean wrestling like Haystack Calhoun / Lord Tally-Ho Blears. Oh yeah, we were kids, and we were tough!

* For the record, I'm not one of those dads who was looking forward to raising a son in his image. I actually was hoping for girls both times. M, on the other hand, knowing firsthand how girls can sometimes behave toward their mother, might have liked a bit more gender balance. I love having girls (though I also anticipate the teen years as something I'll find challenging and be useless during) and never wish the girls were anything but. I just hope they're physical and understand they aren't limited by the expectations of others. You can be a doctor, a senator, a garbage man, a singer, a soccer player.... whatever it is you want to be.

** I did get off the couch long enough to get my camera and take a few pictures: 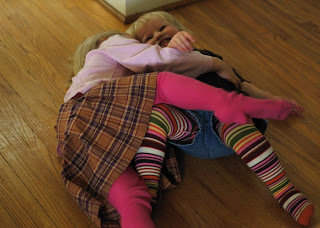 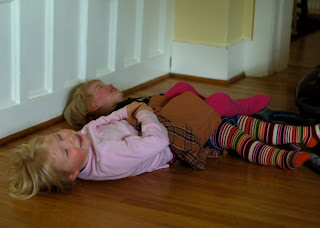 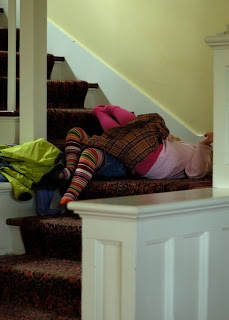