paddling: working for the man...

Our Saturday workout was hard for me. It wasn't the longest one we've done, nor the fastest, but I think my body was still recovering from Thursday night, and as a result, I found this workout to be one of the harder ones I've done lately.

What's interesting to me about the workout is how it revealed my competitiveness. We had two closely matched boats and it mattered to me that our boat stay up with the other one. I'm discovering that I don't like to be behind, especially if I feel like my boat should be keeping up.

This competitiveness seems like a double-edged sword. On the one hand, it's a good motivator. On the other hand, I need to be able to paddle my own race without being linked to someone else (and potentially thrown off by them). Just like in swimming. Which I was never tremendously successful at, though I enjoyed it quite a bit. Harnessing this motivation aspect could be important, especially if I can paddle enough to know what my own race is and how to stick with it.

We had 2 full canoes, plus (the "plus" went into the double-hull as part of a separate 12).

The Dougs steered and we headed east, warming up to Montlake Cut and then starting the workout onto Lake Washington where we headed south toward the I-90 bridge.

Our workout:
I was paddling in #1 of DougM's boat and Jasen was in #1 of DougN's boat and my desire to keep up with Jasen is probably the other main reason this was such a challenging paddle for me -- I worked hard to stick with them (we all worked hard, but I mean I was motivated by that desire). And we did for the most part. The boats were surprisingly closely matched. I like that, even though it means we work harder.

In the early stages of the workout they seemed to be moving better than us and would gain a 1/2 length or so. Then about 1/3 of the way down to I-90 it seemed like we started to get slightly ahead of them. And for the rest of the workout we managed to stay with them or slightly ahead. (It's a little complicated, because before the last set DougM and I moved into the other boat, and DougN and Jasen moved into our boat. So at that point the Dougs were in #1 and Jasen and Maryann were steering. I moved to 2 behind DougM.)

We got through 2 sets and I-90 seemed within reach. We did the first 3min of the 3rd set, then the 5min portion and we were about 50 yards from the bridge, so we continued on during our 1min easy bit and turned and started back north on the 7min part of that set. I was glad to make it to the bridge, and slightly disappointed to not do so during the 5min piece. 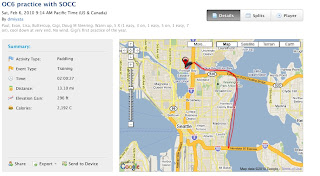 (Note: Because the GPS is on DougM's wrist and only he and I swapped into the other boat, this is "our" workout, but both boats would have done virtually the same distance/time given that we were neck-in-neck the whole way.)

(Again, not much different from what everyone else's would have been -- I think the big gap at roughly 1.40 is when we were switching folks and boats. After that we did our final set, and because we weren't yet through the cut, Doug called for more pushes, including several power 10s!)
Posted by pvz at 8:47 PM