(this is going to cover 2 different workouts, so you may just want to skip it.)

It's possible for me to get into a zone where I can keep up a certain work effort for a reasonably long time. Tuesday night was one of those times.

That night we ended up with 8 paddlers, so I went out in the OC2 with DougN. Our workout: 9x(1min off/9on). The OC6, with DougM steering, ended up doing only a partial workout, so mostly we were by ourselves. We headed out toward the University Bridge for warmup, and then when we hooked up with the OC6 (they had some inexperienced and/or newly returning paddlers) we started back to Lake Union for the meat of the workout. It was blowing slightly from the south, but not too badly.

We crossed the north end of the lake and went down the ship canal toward the Ballard Bridge, circling back to the OC6 which had stopped short of the bridge to do some stroke technique work. At that point they were heading back, so we turned west again and continued our workout.

Doug looked at his watch and said, "that was 3 (the third set). We've got a workout ahead of us!"

I wasn't sure what to expect, but we were moving smoothly and it seemed like things were going well. We paddled down to the locks, swung around and started back east toward the Ballard Bridge and beyond. It's hard to remember where we were for each set, but I know that we started #8 east of the Aurora Bridge, with Doug predicting that we'd finish it about the time we got to the bridge. We actually were farther along, already heading south along the west shore of Lake Union when the set was done. So, 2 left. We finished #9 as we were approaching the south end of the lake, and then turned for Gasworks Park to do the final set.

I felt like I lost some focus and concentration around #7 and didn't really regain it until we were on that last set. In addition, we were heading into the wind for #9, so that was a slower split. We did the final set and were within a few hundred feet of our new (temporary) beach at the Harbor Patrol location just west of Gasworks.

Here are the track and details of the workout: 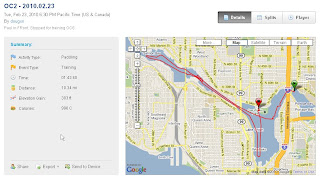 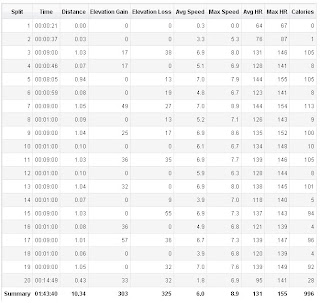 This one was interesting for me in that it seemed hard, it wore me out. We had 7, so one OC6 and the OC1. Our workout: 8x(1off/8on/1sprint). Which seemed ambitious to me. 8 longish sets, and with a sprint ending each one! Okaaaaay......

We paddled out to Lake Washington and along the 520 bridge a bit, but didn't go far because it got lumpy (north breeze reflecting off the bridge) and because Rob was in the OC1 and we were doing some circling to keep together. At some point (halfway through the workout) we did some seat swapping, which was good because it meant I moved from 1 back to 2, and that helped take a little pressure off. 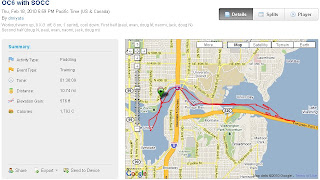 Each sprint leg was hard, with an increase in both rate (number of strokes per minute) and effort (power in each stroke). But we managed it, and I didn't feel too terribly ... terrible. It was hard work, no question, but good hard. Except that my body has been feeling a bit run down lately. (And, in fact, on Friday night I had a sore back that combined with a temp that topped out at 103.6, so I skipped practice the Saturday practice the next day.)

An "interesting" aspect of the workout was that we came close to 2 buoys near Gasworks Park in Lake Union.... before actually hitting a third one.

I'd been in seat 1 before, when we nearly hit a buoy, but this time we actually did hit one.

We were near the end of our workout and were pushing south near Gasworks when a buoy marking part of the seaplane landing area (?) suddenly appeared right at the middle of our iakos. DougN and I were up front, so we both should have seen it, but it was DougM (steering) who yelled "hold water" (jam your paddles in to stop the boat). We hit the buoy as we were slowing down, and luckily it was small enough and light enough so it bumped down and under the front iako, then as our momentum carried us forward, down and under the rear one, and we were sitting there, slightly stunned.

It probably shouldn't have been as much of a surprise as it was, given that just a few minutes before, a companion buoy to this one had appeared suddenly out of the night gloom about 3 feet to our right, moving harmlessly past us as we continued on. And a few minutes before that, we'd had to make a quick left turn when a big cone buoy materialized out of the dark right in front of us.

All I can say is, we were lucky that the 3rd buoy wasn't the first one, because if we'd hit that one, it wouldn't have moved, and we would have hit hard (at about 6 or 7 mph). So we would have either broken an iako, or hulied, or....

I don't think either DougN or I have particularly good night vision. I know I don't. But I try to keep an eye out. One key here was that we were at the end of the workout, and were all pretty tired. The other key is that we probably weren't paying as much attention as we should have been. And it's nearly impossible for the steersman to really see past everyone ahead of him.

On the plus side, our sprints were very consistent, with our mileage for each being .12 - .13mi: 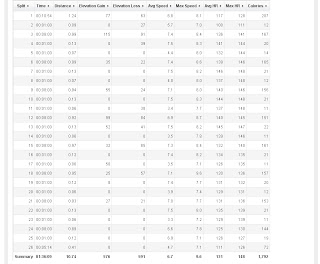