(bonus thursday posting to catch me up, since we'll do another workout this evening)

On Tuesday we had enough paddlers to take out the OC12, which I generally don't like to do. But with the group we had, we got the boats moving, and even managed to get down to I-90 and back (13.34 miles) in just 2 hours. I think that's the first time any of us have been that far in the the OC12, and on a school night too!

What was noticeable for me about this particular workout was just how badly it beat me up. Others in the boats said things like "it actually didn't feel that bad" but for me it was a body-beater.

The only other workout I remember feeling this way was a 4men in an OC6 workout that we did last year, with DougN steering, and me, Jasen and Murray paddling. In that one we went down along the 520 bridge to the east side of the lake and back, and I did some seat1 paddling. On this particular day Doug told us not to try and move the canoe all by ourselves, a comment that helped me think about paddling hard when it feels like we're not moving. And this is the difference between that workout and Tuesdays -- in the former it felt like we weren't moving.

On Tuesday we felt like we were cruising! It felt good the way the canoe was moving. But it took a lot out of me. And I'm not sure just why that might be.

I'm fighting off a cold (the same cold the girls had last week) and that's probably a factor. I'm also dealing with some lingering back pain, an on-again/off-again thing that started after our trip out to the coast and was rekindled last weekend when I spent an hour with a small sledgehammer and a cold chisel, busting up an old walkway.

But enough whining. This evening I expect we'll have enough paddlers to fill an OC6, so at least I won't be trying to keep up with the Dougs. 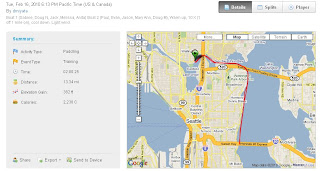 Once again, note DougM's razor-straight (did I just make that up?) steering.

And for those of you with a data deathwish, our splits: 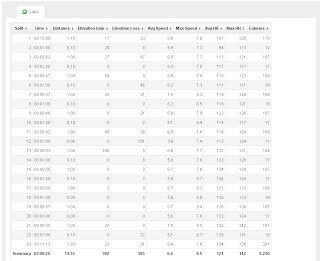 The key thing for me is to see how well we managed to keep even on the 1-mile segments. Did we do them in the same amount of time throughout the workout? Or were we taking longer and longer? Looks like we started doing 1 mile in just under 9 minutes (8:52) and finished our last one in 8:35, our fastest one. (The longest one took 9:03.) Not too shabby!
Posted by pvz at 5:01 AM

You do realize if you zoom in as close on Doug's track as you do on your own his is just at wiggly! There is no way anybody can steer a perfectly straight line unless there is no wind, waves, and everyone is paddling perfectly, really really perfectly, and that just never happens, there is always some variation. You did a great job steering the other day and we all did great Tues night.