(this is pure nostalgia, spurred on by the news that Mosi Tatupu died. if you don't care about him, or even more, about old, now gone buildings in Honolulu, you can safely skip this.) 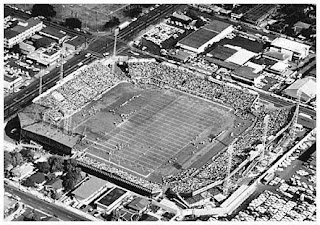 Honolulu Stadium
Going to Punahou in the late 1960s and early 1970s meant (as a boy at least), among other things, being aware of those cool guys that played football. They were big. And strong. And scary. Everyone seemed to treat them with respect. Football mattered. In fact, in Hawaii, with no real pro teams, high school (and UH) sports really mattered a lot. And it seemed like we always had a good team, so that added to their appeal. Moreover, in those days the ILH included both private and public schools, with great rivalries: Kamehameha, Damien, Kalani, Roosevelt, Iolani, Farrington, McKinley.....

Then there were the pre-game pep rallies. I'm not sure what they did in the upper school, but in the Winnie Units where us peewee kids struggled with our school work, we had pre-game pep rallies at lunch time the Friday before the Saturday games. The cheer and song leaders would come from across campus from the "Academy," dressed in their blue and yellow pleated skirts, to lead the kids in cheers and songs ("Strawberry shortcake, huckleberry pie, V I C T O R Y..." which, when I think about it, is an odd cheer for an island school -- I doubt I had any idea what "huckleberry pie" was.) They sold small ribbons with slogans like "Bomb da Bulldogs!" for... I don't remember who the Bulldogs where... Farrington? But that's one ribbon I bought and still remember, and possibly bake sale items. And general enthusiasm was had by all the small kine kids who got a distraction from less important things like times tables and reading and spelling.

The games were held in Honolulu Stadium, which was called the Termite Palace even then, because it was supposedly honeycombed by termites and other pests. But who cared! We gathered, rain or shine (and in many of my memories it was raining -- after all, the stadium sat not far from Manoa Valley down which the "mist" came), and cheered on the team. One memory is being dropped off by mom, wearing new Addidas shoes, getting soaking wet, thoroughly enjoying myself. (Did we win? No idea!)

And what a team! The song and cheer leaders were enthusiastic and pretty upper class girls, but it was the players that mattered. Those guys in helmets and pads and the dark blue uniforms, looking so.... real, so grown up, so important. The two I remember best are Arnold Morgado and Mosi Tatupu. There were others, obviously, but these two were the stars for me.

Arnold came first and has since gone on to politics. Mosi was one year ahead of my older sister and set rushing records that lasted for over 10 years. He went on to play at USC and then at New England with the Patriots. (In an odd convergence, his son now plays for Seattle, spending his time on a team that probably couldn't beat one of his father's high school teams, but that's a different issue and one I don't really give a rip about.)

I just learned he recently died, which got me thinking about things I'd not thought of in years, including the pep rallies and the games, and the stadium itself. 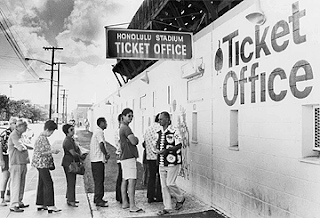 Honolulu Stadium was built of wood, which meant it not only was susceptible to termites, but that it flexed in ways exciting to kids but probably not quite as enjoyable to parents. I remember participating in foot stamping cheers that seemed to get the entire stands bouncing up and down. Now that's good sport! I also remember that the seats were 2 planks of wood, and it was easy to drop something down underneath them. Money could fall out of your pockets, or drinks spill in the excitement. I think the bathrooms were down there, but I made it a point to avoid going under the stands -- it seemed to risky with all those people, potential droppers of things.

In addition to the high school games, the stadium was home to the University of Hawaii teams and to the Islanders, our triple-A baseball team.

It was the Islanders my family cared about, after our high school football teams (mom went to Roosevelt, so she probably had a soft spot for the Rough Riders, but dad was Punahou all the way, so as a household we tended toward the Buff 'n' Blue). We went to baseball games, ate peanuts and cheered the players on. We listened to games at night, on the radio. In "simulcast" which meant that the announcer was getting and reading an account of the game, pitch by pitch and play by play, and was then reading this as if he were at the game. There were sound effects (bats hitting balls, crowd noises) and as a kid we didn't know at first, and then didn't care. It was exciting, listening in the dark of a bedroom to the team playing in exotic places like San Diego!

Which leads me to a digression, but this whole thing is digression, so it doesn't matter: one of our regular announcers (along with Chuck Leahey) was Al Michaels. Of ABC TV fame. Back then he announced high school football on the radio, and one of his pet phrases was "3rd down and a manapua to go!" I remember when I first saw him on TV and felt as though a personal friend had made it to the big time! And there he was, talking us through the 1989 earthquake in San Francisco during the Bay Area World Series! Big time!

I remember flying bugs at Islander games, drawn by the bright lights, buzzing around us as we threw our peanut shells on the worn wood beneath us and watched our team.

And I remember one July 4th game, after which there was going to be fireworks. They had a hook-and-ladder firetruck from which they were going to hang a boatload of firecrackers. After the game. And....

And, dad made us all leave early, to avoid traffic. It's a memory that has stuck with me, and which I consider whenever I'm with the girls and am tempted to duck out of something to avoid traffic. We missed the fireworks because dad didn't want to sit in traffic! You can imagine how that went over with us kids.