... in my beautiful balloon...
note: edited 12/14 to add visuals.
Being another cautionary tale in movie selection/viewing:

The gods of children's films are lined up against me.

So far the girls and I have had a couple of bad experiences with movies, including The Three Pigs and Babe. Add to that our weekend experience with Up, a heartwarming animated movie from the same folks who bring you the "happiest place on earth." (Have I mentioned that I am apparently the only American with absolutely no interest in visiting either Disneyland or Disneyworld?)

Spoiler alert (although the girls and I are probably the only people who have not seen this movie, where "see" = having the images display in front of us but having the story shoot so far over our heads that we have no idea what's going on), anyway, I'm about to reveal key points of the story, up to but not including the actual end which we did not watch due to fear and sobbing in the assembled watchers.

So, this little animated feature starts with a logo of the magic castle which tells me everything is fine, this is from Mr. Disney who loves kids so much that he wanted everyone to be a kid forever. Or something. In any case, my guard was down. Or asleep. Or out to lunch.

Very quickly though, I realize we're in "deep water" (note: for actual water reference see the end of this movie review).

The movie starts with some black and white which tells me that the character in the movie is watching a movie himself, but tells the girls that our TV or the DVD is broken because it's not in color. Then, in short order, the boy meets a girl who shares his adventuring spirit but who breaks his arm (K: Where did he go? me: He fell off that board. K: But is he hurt? L: Where did he go? me: I guess so, it looks like that's an ambulance. L: No, it not an ambulanthe! Ith a car!! K: But is he going to the hospital? me: I don't know. L: It'th not a ambulanthe!) and then they're getting married and wanting babies and not being able to have babies and (K: What they doing? me: They're painting a nursery for a baby. K: They having a baby? L: What they doing? me: I think so, it looks like it. (oh crap!) No, they aren't. K: What? L: What Daddy? me: They wanted to have a baby, but it's not going to happen. K: What? L: What? me: They don't have a baby. K: Why not? L: What Daddy?!? me: No baby. K: But why? me: I don't know K. L: What? me: They wanted a baby but they aren't having one. K: Why? me: I don't know K. L: what?) then getting older and older and older until eventually the (now) old man's wife gets sick and dies and then he's alone in his house while all around him big buildings are being built and his peace is destroyed and... (K: Where is that girl? me: She got older. So did the boy. He's that old man now. L: What Daddy?! K: She got older? me: Yeah. K: But where is she? L: Yeah, where is she Daddy? me: she got sick, she...(crap!) she's not here any more. K: Is she died? me (quietly): Yes K, she died. L (loudly): Ith the died Daddy? me: Yes. Let's see what happens.

The man hits another man with his cane and is hauled away to court and sentenced to leave his home and be put into a nursing home. And the girls have no idea how we got from a broken black and white movie to here, but they're still sitting beside me.

And this is all the lead-up to the actual story! We haven't even started yet!!

Next thing we know, the house is floating over the city, held up by thousands of helium balloons, and there's a thunderstorm coming.

This is the point at which we first considered just turning it off. And in retrospect, I should have. The noise and lightning of the storm frightened both girls, and any "humor" associated with the chaos of the floating house in the storm was entirely lost.

From here we end up in the clouds. At least the house is in the clouds, and we are confused in our basement. Soon there is a pack of mean dogs, an oddly sweet bird (possibly a Big Bird association-by-size connection helps here?), the grumpy old man, and a hapless little boy explorer. All the girls focus on is the fact that the mean dogs grab the bird by the leg and hurt it badly. At this point we learn there are baby birds somewhere distant in the jungle, and that this bird ("Kevin" to the boy explorer) is a mama. And the girls start to really get worried.

How did the bird get hurt? Why? How can it get back to its babies? Why did the dogs bite it? Why won't that man help it? Whywhywhywhatwhatwhat? And I realize K is crying now, huddled in the corner of the couch.

Worse, she is embarrassed to be crying, and doesn't want either my comfort or my attention. 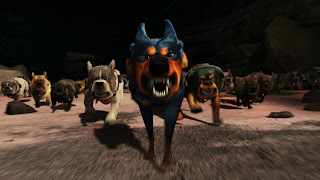 Uh, yeah, I was scared!
Note to those of you as clueless as I was: This is the second point at which I should have turned the damn thing off!
I reassure her that the bird will be ok, that it will get back to its babies, and that the dogs won't hurt it more. Note that I'm going on faith here, faith build entirely on my own childhood experience with Disney films, but now that I think about it, that's the same company that brought me the Headless Horseman among other sweet, family-oriented entertainment.

A dog that looks a little like our own beast shows up and acts somewhat nicely, sucking us all in, and then the bird is caught by the bad man (who controls all the mean dogs and has a big gun that shoots at the old man and the boy and the bird), and the boy and the old man need to rescue it. But the man is working on his own issues having to do with promises to his dead wife, and so ditches everyone. Or tries to.

Note: Any point from here on out would have been a great time to turn the TV off, but noooooooo.... I wanted to get to the happy place so K would be ok with all that I'd put her through to this point.

Mean dog chases ensue, captured bird images are shown, evil man dominates the screen. I imagine that things are taking a turn for the better when the grumpy old man makes a choice to help the bird, but this too is lost on the girls, and when K sobs that she doesn't want to watch it, that we should turn it off, and L agrees, I leap up and hit the OFF button. 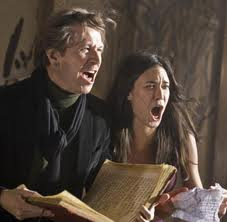 What we looked like (pretty much)
K is rather traumatized, and even Saddle Club doesn't help, so we retire to the upstairs to read books about happy dragons and lambs and birthday parties.

Interestingly, possibly because even less registered on her, L didn't seem to have as strong/bad a reaction. She seemed to be picking up on K's reaction rather than having one of her own. Which is all irrelevant given that I had 2 crying girls on my hands, one truly sobbing and the other snuggling close to me for comfort and saying she is "cared."
So, I can't tell you exactly how the thing ends, but I'm guessing the grumpy old man helps the bird get back to her nest/babies, and the boy explorer gets back to his home in the city, and possibly the grumpy old man lives or maybe he doesn't since after this adventure he won't really have anything to live for, but I'm just as happy to have to speculate on this since we did get some nice reading in.

It's back to Curious George and Thomas the Tank Engine and Mary Poppins for us. And Saddle Club of course.

What struck me most, besides the pain of seeing K so traumatized but refusing my attentions, was the fact that she seemed to be embarrassed about her feelings. I worry at how well she'll be able to express herself when she's feeling something strongly? I wish she would just let it out and not be so conscious of her actions. Which may be an odd thing to hear me say, after all the complaining I've done about tantrums. But I have this (just developing) theory that the tantrums are as much about not knowing how to express oneself as they are about expressing some specific emotion like anger or frustration. Sadly, I suspect K has inherited some of this dislike of emotion from me. There's something about the sins of the father....

On a slightly different note:

The sun did not shine, it was too wet to play, so we sat in the house all that cold, cold wet day...

I did mention the rain in my Saturday night post. Well it kept us inside all day Sunday and not only did it remind me somewhat of the rain the night before L was born, but it apparently reminded our basement of that night as well because it caused a small river through it. Which means we sat watching this "family" movie beside a tiny class v rapid. And all I can say is "thank you M!" for suggesting the removable foam tiles that we later removed and so far I don't think we need to replace the bamboo floor for the 4th time, but I also want to say that we never once saw water in the basement before we remodeled it.

Oh yeah, and to paraphrase the great Johnny Cash*:
Disney Productions, you've been a livin' heck to us!
*(see San Quentin for the glorious original version)
Posted by pvz at 4:01 AM

Oh that's awful!! I'm so sorry they had such a bad reaction. Up is one of our favorite movies. It doens't seem to phase Austin - we just like Doug, the talking Dog. And Kelly and I usually cry. Actually, we cry in Wall-E, Up, and Toy Story 3. Pretty sad, eh?

Most of the movies we've seen are Pixar. In fact, I think we've seen all of them now. Austin hasn't had a problem with any - the only thing he's scared of is one of the Wallace & Gromit shorts! He even wanted to tell Santa (but who he's too scared to visit), about the "robot dog." - that's who he's scared of.... Crazy. My only problem with Pixar is that it's so advertised. Austin doesn't want anything for Christmas that isn't Toy Story. It drives me nuts.

Sorry I went AWOL after my email a few weeks ago. Been a very busy month! But things are calming down somewhat, luckily.

I wish I had some good movie suggestions for y'all, but I'm thinking they may have different tastes!