(written in bed, with approximately 20 million gallons of rainwater pouring down on the roof, trying to find its way in) 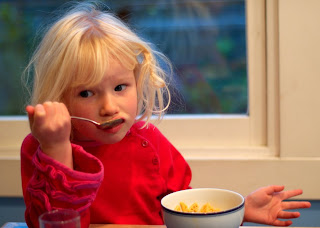 You gotta problem with something?
Today was a 2-Saddle Club/2-Thomas the Tank Engine/1-Curious George kind of day, and while I'm not proud of those numbers, I claim some small leeway because 1) the girls are both alive, 2) they're both asleep, 3) in their own big-girl beds, and 4) I lived through a 6yo birthday party in Kirkland at "Pump it Up," an indoor inflatable bounce party location. Already you know that's my idea of fun, but add to it a 45 minute drive in pouring rain, and it becomes the reason for the day.

If you've been reading along, and I don't blame anyone who hasn't, what with my hiatus and subsequent sporaticity, but if you have been, you know that this weekend M is out of town, and I'm "in charge" of the girls not 3 days after L has moved into her "big girl bed." So you know I was looking forward to getting out of the house and to this birthday party.

I practically had to drag K across the parking lot (and through ankle-deep puddles) once we got there, with her saying "why did you bring me?" and "I'm too shy!" Damned if I was going to turn back at that point!

(I'll be honest though, I can completely relate to her attitude. It's pretty much spot on how I feel when faced with similar situations. So what could I do except mutter understanding but unintelligible mutterings and pull her along. Which I did.)

Once inside the building she needs to go to the bathroom. This is the girl who can go the entire day without one potty break while at school. And she just went before we left home. Maybe it's the sound of rushing water from all the runoff? Anyway, we manage that, then head down to "arena A" where the party is in full swing. And by "full swing" I mean there are small kids (boys and girls) racing around among the huge inflatable bounce houses, obstacle courses and slides. K buries her head in the back of my knees.

A friend of hers screams excitedly at her and comes running. K buries herself deeper into the backs of my legs. Her friend wants to go crawling over the obstacles with her. K wants to crawl back home.

Ultimately, it takes me going into the obstacle course, helping her up the soft climbing wall, pulling her over the bump, for her to do it. And then we have to do it again. And then the next thing I know she's joined the gang, all screaming and climbing and bouncing and sliding, with K screaming louder than anyone else. Whew! Mission accomplished?

We both managed to survive the 1.5 hour party (we're 30 minutes late), with 2 potty breaks, some pizza and cake, and then it's back into traffic and the storm to drive home and get L.

But here's one of the things that reminds me of what K can be. As I'm driving out of the parking lot, she's digging in her little pirate bag of booty, pulling out a pirate bracelet and a pirate necklace and pirate coin purse (?!?) and then a pirate tattoo. And I'm thinking but not saying, that L will be mighty jealous when she sees all this. And K pulls out a second tattoo and out of the blue says "Now L can have one too." And I say "Really K?" and she looks at me like I'm nuts and says "Yeah." And I fall all over myself to say how sweet this is, that she's going to share with her sister.

This is the same girl who, last night, was kicking in the tub so violently because the washcloth I got her was "too stretched out" that I swooped down and lifted her out... by her ankles! The same girl who told me she hated me and that she was never going to talk to me again.

Somehow this tattoo sharing thing balanced out the other stuff pretty well. It even almost made the birthday party worth it. And the girls were (fairly) well behaved this afternoon and evening, letting the "can I have dessert?" begging go after only a few whiny complaints.

So, if we don't wash away overnight, and assuming we get a decent amount of sleep, I think we're looking pretty good to all still be here when M gets back tomorrow afternoon. It's a lot of "ifs" but that's what I live on these days. And I probably just jinxed it anway.

Sleep well everyone. Please!
Posted by pvz at 9:38 PM