This is a cautionary tale. Pride and falls and all of that. 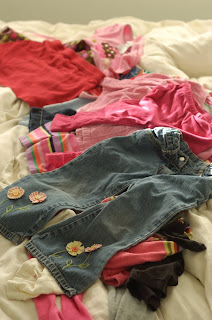 Monday Morning
(the aftermath)
K is something of a clothes... horse, if by "clothes horse" one means that she's picky about her clothes to the point of driving us freakin' nuts at times. When she's got her options, we can face her at the dresser and say "pick out an outfit for tomorrow." When something comes up, we're screwed.

Example: She won't wear a shirt if it has a stain, even one she caused (maybe especially one she caused?). If there's a hole in a pair of pants, they're rejected.

At least if she notices. I've managed, a time or two, to slip one past her. There's a spot on the back of a sleeve, or a tiny tear and I get the article of clothing on before she sees the offending flaw, and we're good. For the moment. She'll sometimes notice later in the day that, "Hey, what this hole doing here?!?" and then the pants are doomed to the rejected-so-L-gets-them pile. And the thing about K is that she'll remember. She has that kind of memory. Meaning the opposite kind of memory than I do. I can't remember from moment to moment which shirt belongs to which girl, but she'll pull a long-sleeved shirt out of her drawer that hasn't been seen in weeks and say "This not supposed to be here! This has a stain!!"

I consider it a small victory if I happen to notice something that she doesn't, and as a result the morning dressing goes relatively smoothly. I have an exciting life.

The worst-case morning scenario is to have her dressed and ready, and 2 minutes from stepping out the door to carpool with our neighbor, and then have her discover a problem. Because there is never a simple answer.

An unexpected complication generally means that the world comes crashing down around us, and there are at least four stages we'll need to work through before we can address the issue itself: wailing, meltdown, refusal of offered options, slow reduction of tears. Note: I wonder where she gets this inability to adjust to the unexpected?!?

This is all a long and probably boring lead up to my description of our "Monday Morning Coming Down" experience while M was away.

I'd already had K home all day Friday, even though I had work to do. M wouldn't be home until late Monday evening, so I was on tap for the morning handoff. And it had to happen. I couldn't take another day of working from home with company. I didn't have either the patience or the flexibility for it. I had to deliver some documentation for work.

My plan: Get both K and L to pick out their outfits on Sunday night. Seems relatively obvious, and M had probably figured this out two years ago. But I was feeling especially cocky when I suggested it and the girls hopped right into my trap. They found and laid out their outfits.

K has a tendency to literally lay her outfit out. I should have taken a picture, especially given what ultimately happened the next morning, but her procedure was:


L, on the other hand grabbed some things from her drawers and handed them to me. I put them in a ball on the top of my dresser.

We were set! I was getting this solo daddy thing wired (where "wired" = I haven't yet killed them either accidentally or on purpose)!! Look at me!!! NO HANDS!!!!

Fast-forward to the morning. L has joined me some time in the night. Not that she'd joined me without me knowing, because she's still in a crib and though she knows how to climb into it, she still hasn't yet figured out that it's 10 times easier to climb out. (Shhhh!! Don't say anything!!!) So apparently at some point in the middle of the night she woke up, called out to me, and I got out of bed and got her and brought her back into my bed, which, with M gone, is just barely large enough for me to share with L.

Anyway, as I was saying, L is tucked in against my left side, snoring softly, when the door opens shortly after 6am (note: due to the time change, I was on easy street. The girls were able to sleep in (so their bodies believed) and yet still be up early enough to not make the morning a rush)... the door opens, and K joins us, slipping in on my right.

So there we lie, the three of us, and K tosses and turns and makes noises with her mouth so that eventually she wakes up L, who sits up and asks loudly, "Where is K?"

I point to my right side. L looks over for several seconds, then lies back down with a thump. We remain this way for 4 to 9 seconds before K is ready to get up. L would like to stay in bed and snuggle, waking slowly, but she isn't going to be left behind, so we all get up and move downstairs for the main event of the morning, breakfast.

I'll skip right over that and more on to the pièce de résistance, the Getting the Girls Off to School/Daycare. The bit I'd been so worried about until I thought of the clothes-before-bed approach.

I herd them upstairs to get dressed. They do so, pulling on their assorted, previously decided upon outfits. And that is as good as it gets. In fact, I should pause here to bask in the glow a moment, because it doesn't last.

K sneezes. I grab a Kleenex and wipe her nose, but it's already too late. She's already midway into a fit because she's somehow managed to wipe her sleeve against her face after the sneeze. The dress has sneeze on it and she can't wear it.

Did I mention that we have about 5 minutes before the neighbor will be looking for us?

I tell K I'll wipe the sleeve. Nope, not good enough. I look at the sleeve and don't see a thing. I tell her it's not dirty, but that doesn't buy me anything. She is frantic, pulling the dress off and wailing that she doesn't have anything to wear, and L decides, in the spirit of collaboration, that her outfit isn't going to work for her either. For. No. Good. Reason.

K is at the point of the meltdown arc in which she isn't going to be able to find anything to wear. Ever. This means refusing outright, any offered option.

L is pouting too, mostly in support of her sister. "Now I never going to go to Miss Ronda's! Ever again!!"

Somehow I find something. Leggings that go with her Cupcake top, a set I've washed on Sunday because, with a rather mystical foresight, I figured "you never know!"

K puts up with me getting her into this stuff, even while she is winding down the tantrum. L is still complaining, but I have another 30 minutes before I need to drive her to daycare, so I ignore her. I get K outside as the neighbor comes around the hedge, and I kiss her goodbye.

A few minutes later I've found L something to wear, and in less than an hour I'm sitting at my laptop, updating the documents I need to finish for work.

Later, I washed the dress.

I'll confess that I was tempted to just put it back on its hanger and just let K wear it as-is. But what would that have accomplished?

Would I want to say "K, I told you so! There wasn't any sneeze on that sleeve and you just wore it to school! Ha ha!!" Uh, no, I wouldn't. And knowing her, she would have asked me anyway, before putting it on: "Did you wash this Daddy?" and as I make it a practice to never lie to her, I would have had to say "No, but it doesn't need it...."

Instead, when I brought her home that afternoon I told her I'd washed the dress and it was ready for her to wear the next morning. And she said "thank you." And that almost made it worth it.
Posted by pvz at 4:42 AM