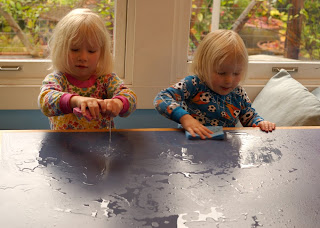 "Cleaning" the table
One of the parenting skills I lack is the ability to gracefully shift gears and adjust on the fly. I don't seem to be much for spontaneity.

On Saturday the girls were at loose ends. I could have stuck them in front of the TV to watch some videos (and I did a bit later), but I hate to do that. I hate to do it from a philosophical point of view (I think the passive watching is not good for them) and from a practical point of view (if they watch now, what will I have in my bag of tricks for later?!?).

I happened to get a sponge out to wipe the table and K wanted to use it. Then L wanted to use it, so I managed to find a second one (whew! bullet dodged!!). And then they wanted the sponges "wetted" so I did that. And they wanted more water, and more water, and more and more and more.... It wasn't what I was anticipating nor what I would have ideally chosen (which would have been what, exactly? I don't know. Maybe sitting quietly with 2 books, reading to each other while their tinkling laughter filled the house with sisterly love?). But it was (relatively) benign and relatively clean. I kept refilling the sponges, even as the water started to drip onto the floor. I mopped up a little bit, but let them go at it.

Calling it water torture is a bit of an exaggeration (and lord knows I don't like to exaggerate when I write!), but it was "challenging" to my missing spontaneity genes.

Shortly after this picture was taken, L suddenly needed to pee and didn't quite make the toilet. Another mopping up took place. Along with a change of clothing. I think that's about the time we switched to the videos.

What doesn't show in this picture: it's freakin' pouring outside so maybe I should have just put them out on the back deck, and the girls are sitting on fabric cushions so it's a good thing the floor slopes in toward the center of the room.
Posted by pvz at 4:43 AM