it's another edition of monochrome-monday!

(And a blustery, soggy Monday it is.) 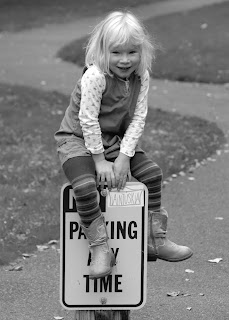 No Parking
Today a pair of photos, taken a couple of weeks ago at a rowing regatta we attended, in which my sister and our nephew rowed. And did we get to see them row? Nope. Not by a long shot. My sister's boat had to be on the water at 6.45a for an... 8a? start? Our nephew's boat was later, but we didn't know how much later, and we were unable to get our family out the door in time. 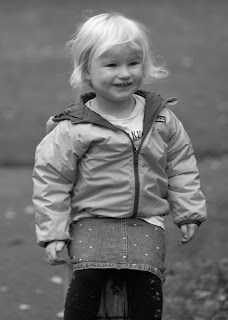 There's something about a jeans skirt and tights...
(that make a little girl look grown up)
Still, the girls got to see some shells being rowed by women and by girls, which is always one of my goals - expose them to females being active. Who knows what they'll end up doing, but I don't want them to not do something because it didn't seem possible. Anything should be possible!

And speaking about possibilities and anything, on the bus this morning I read a section of a book called The Art of Non-Conformity (Chris Guillebeau) which made this point: most of us (in the U.S. at least) have options, and when we say that we "wish" we could do something (like travel the world, or take 6 months off on a beach) we ought to recognize that we could do these things but we've made choices and they aren't a high enough priority to us. We might have as a higher priority to own a house and/or to have a new car. Priorities which may be completely sensible, but they are choices, not necessities, and this book pointed out that most often, when we do something, we have made a choice rather than having been forced into it.

The nice thing about this is, it puts the onus on each of us to take responsibility for our situations and our decisions. That's also, unfortunately, the not-so-nice thing. It means that, if we feel like we're doing something we don't want to do, we only have ourselves to blame.

So the lesson today girls, on the soggy Monday, is that you're in the enviable position of being able to decide what to make of your lives and the impact you have on your world. And I hope I can be the sort of father that helps you understand you have choices, and that making those choices is one of the biggest responsibilities and most exciting aspects of living. But for now, I hope you both have wonderful days as the rain lashes the windows and pools in the yard.
Posted by pvz at 4:40 AM