DougM and I did a long OC2 practice on last Thursday night, and though I started the workout feeling weak and draggy, it ended up being a good, hard workout.

I've been paddling all year with both Dougs, going Tues/Thurs due to childcare/school schedules, which means I've not been making most of the normally scheduled club workouts (Mon/Weds). The tradeoff has been that I've benefited from having personal trainers that most paddlers would pay for. And all I've had to do is show up! I think I've gained a huge amount from spending almost every Tuesday in an OC2 with DougM, and now that my schedule is shifting back to Mon/Weds, I'm not going to have this opportunity for at least a while.

The Tuesday workouts have been small boat workouts (OC2 or OC1), but the Thursday workouts were largely OC6 paddles, with the other paddlers being folks on the Na Pali crews. Those paddles became known as the "make me cry" workouts, due to a joking comment I made to DougM at one point. We regularly went 15+ miles (sometimes 18) and 3 hours and kept up a good pace the entire time. But after the Na Pali race, and especially over the last few weeks, turnout has dwindled, and the last 2 Thursdays has been just DougM and me. Which, is fine with me. It's just more personalized training time!

So last Thursday we did our final "make me cry" workout. I said we should just do a "cruise" workout given that I was feeling dragged out. We started out and headed to Lake Washington to check out the wind. It was supposed to be blowing hard from the south, and it was doing that to a fair degree, which meant we were heading south, into it, toward I90.

Doug didn't think we'd make the bridge, given the swells we were pushing into, and the early sunset, but we did our best to paddle hard, and he even managed to catch some small bumps that were running south, against the wind swell. It was odd, feeling the canoe pick up and start to run a little, even as we were crashing into oncoming waves. Odd and fun.

As we got closer to I90 and the wind seemed to back off a bit, I said "You're not going to turn me around now!" and he laughed and said we'd make the bridge. Which we did, surfing more small bumps as we neared it. Then a quick turnaround, and we were headed back north.

Now we were paddling with the wind and swells, and Doug was regularly catching bumps so we were surfing. The surfing, I've learned, is frequently just a subtle increase in speed, coupled with a lifting of the back of the boat. It doesn't always (or even usually) feel like board surfing, where you catch and drop in and tuck, going across the face of the wave. It's more a sense of feeling the front of the canoe drop down and the back rise up and then you paddle hard for 5 strokes or so, and there's an increase in speed that isn't directly related to how hard you're now paddling. If you're lucky, you get 10 seconds of that lift, which can mean a lot in a race, especially if you're catching regular bumps. If you're really lucky, you can sometimes stick with a bump for 20 or 30 seconds, adjusting, trying to stay with it without over paddling and going out past it. It's a delicate balance, and the more experience you have, and the more you've been paddling with your boat mates, the easier it is. At this point in the season, DougM and I have been doing this enough that I even sometimes know when to push without having him say so. And at the least, I react as he tells me "now!"

I felt strong the entire way in, and as we approached the Montlake cut, I started to want to really push it to the end. We ran in ahead of a powerboat and continued through the cut in mostly smooth water and dying light. Coming out the west end, we powered toward the University Bridge. There were rowing shells working out in the calm water, and as we passed under the bridge and headed out into Lake Union, there was a single that we were trailing and that I wanted to catch.

So I pushed and Doug pushed behind me, and even though we were going into the wind again and tired we nearly caught him before turning off into Waterway 18. 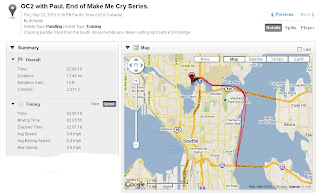 Our track, along with the vitals
It was a great finish to the Make Me Cry series, and fitting in a way that it was only the two of us, as we'd been the original instigators of that workout, with Doug steering, and me trying not to cry.

Some of the things I've enjoyed about paddling with Doug:
Our splits: 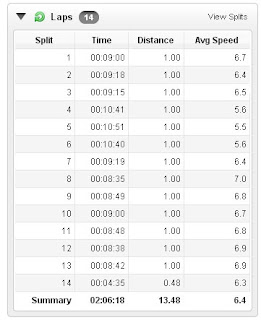