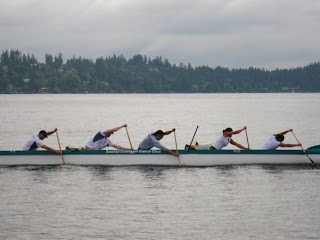 Long post on the race. For more, see here.

All photos courtesy of Bethany Fong.

This last Saturday was our big change-out race in Lake Washington. ~28 miles of paddling in (it turns out) just under 4 hours. Not too bad, especially given that our canoe had some rigging issues that we discovered after the race. (More on the rigging issues in a later post.)

I was nervous heading into the race, but then I'm always nervous before races. Other folks who'd done change-out races before were telling me they enjoy them more than irons (same 6 paddlers for the entire distance), but I didn't really get that. I do now.

We started well, but without pushing too hard. As Murray (steersman) said, it's a long race and the important part will be 2/3 of the way through. Karisa was in 1, Mike in 2, me in 3, Natty in 4, Malia in 5 and Murray steering. On the escort boat were Janelle, Naomi and Erik. Erik was a last-minute addition to fill out the team, and though he has never paddled with us, he did fine. It's hard to jump into a boat with folks you haven't paddled with before. Also Bethany keeping track of the change-outs and the time. And Diane Yuen, who I'd never met, but is another SOCC team member and did a great job (with Beth) of cheering us on when we were dragging. 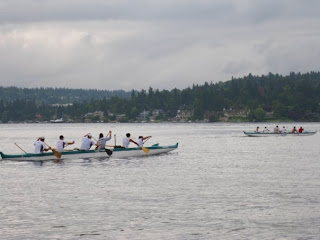 We kept pace with our other SOCC boat (the headed-to-Catalina crew) and that felt good too. Out past the dog park point and Sound Garden of Magnuson Park, then angling southeast across the lake to the east end of the 520 bridge.

It was a gray day, threatening a drizzle (it'd been raining the night before), but without any wind. So, no headwind (good) and few boat wakes (good) because the fair-weather boaters stayed home. We felt pretty good crossing toward the bridge, and then it was time for our first change-out, 1/2/3 hopping into the water and replaced by Janelle/Naomi/Erik. 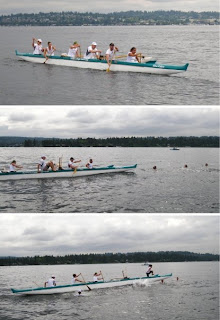 We hopped, swam to the escort boat, and climbed aboard for our first 24 minutes rest. I was feeling good, and having a break was a treat. I quickly drank 1/2 liter of water, ate some baked potatoes and 1/2 a bagel, then pulled on a fleece and watched the canoe keep chugging south.

We followed under the 520 bridge and along the east shore of Lake Washington, trailing the other SOCC canoe as well. Still keeping pace with them. Things were looking good and I was feeling good. A bit cool, but good.

Somewhere north of Mercer Island we did our next change. This was seats 1/4/5 getting out, with Karisa/me/Mike getting in. We hopped out of the escort boat into the water (which felt a tad chilly at this point) and lined up for the approaching canoe. Then the canoe was on us the paddlers were rolling out and we were climbing in. It's something of a blur to me, but we managed it decently, I got my paddle (which was stored in one of Garrett's unpatented paddle baskets) and dug in.

At this point, paddling under I-90 and along the west shore of Mercer Island, our Catalina crew started leaving us behind. It was disappointing, but somewhat to be expected. They're a good, strong crew with lots of experience. Still, I'd been hoping to stay closer to them.

We paddled and I found myself wondering how long this 48 minutes was going to feel. The first 24 went by quickly. The water was smooth and we were pretty much alone with our escort boat. Then the 1/2/3 change came and Natty was climbing in ahead of me. She got hung up and I grabbed her leg and helped her in. I don't think she minded, but it wasn't something I considered for very long. It seemed to me like she wanted to be in, and I was in, so it made sense to help. The next 24 minutes went a little more slowly. My back was starting to tighten up a bit. We seemed to be going slowly. I tried to rotate and reach to stretch my back out, and then it was time for the 1/4/5 change. We hopped out and were swimming for the escort boat again.

24 minutes of recuperation time! Mike had candied ginger and fresh watermelon (separately) and shared both. Very cool, very generous. I drank another 1/2 liter of water and ate more potatos and some peanut butter pretzels. We were heading around the bottom of Mercer Island now. 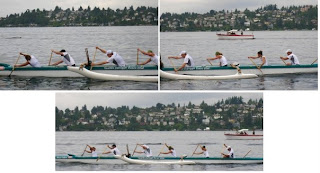 I don't really remember where we did the next change. Along the eastern shore of the island. I know we got back in along that shore, but I don't know where. I was in seat 3 again, with Mike in 2. Again it felt like we were dragging, and far up ahead I could see the other crew disappearing in the distance. Janelle asked "what's dragging?" At another point Natty asked the same thing, so we all felt it, but other than focusing on timing, it was hard to say what was going wrong.

Another 1/4/5 change after we got under the I-90 bridge and we started feeling like we were moving a bit better. Then 1/2/3 were out and we climbed into the escort boat and rested and watched the other crew, who also seemed to be getting into a good rhythm. The sun was starting to come out and we kept pace with the canoe and caught our breath. 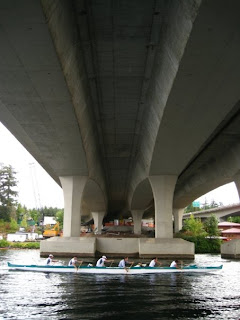 Now we needed to make a decision.

We were cruising along the east side of the lake with the 520 bridge was coming up. 5 minutes until the next 1/4/5 change. Wait until after the bridge? or do it before? And how long would it take to get across the lake and back to Magnuson Park? If it went longer than 48 minutes, did we want to do another change? Or would we tough it out? Bethany and Diane on the escort boat helped us think this through. We opted to do the change before the bridge and if we were more than 12 minutes out from the finish after 48, we'd do one more change. 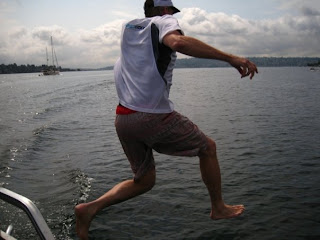 We did our swap before reaching the bridge and I was back in 4, Mike in 5 and Karisa in 1. We must have done one more swap 24 minutes later, but I don't really remember it. In that one, a 1/2/3 change, Janelle got in 1, Malia in 2 and Natty in 3. At least that's what the change chart says. I have no recollection!

Now it was just a grind across the lake and toward the park. We pulled hard, staying in sync well and feeling like we were moving pretty well. The point got closer and closer and then we were rounding the last buoy off the dog park. 10 minutes more.... 5 minutes more. We all wanted to finish strong, though we were the last boat coming in (or so we thought). I felt like we were paddling harder and going faster than we had been, and then I could see the finish line and our other canoe waiting for us. More paddling, 16 and switch, 16 and switch, and we were over.

I was exhausted, but felt good at having done it, at having finished, at having had the opportunity to paddle with a great group of folks. 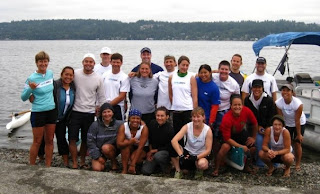 It was really great to have the other canoe waiting for us, and we both slowly paddled to shore where we had food and beer and rum punch waiting for us.

One of the things that's happening, as I do more of these races (and more practices as well), is I'm starting to get comfortable in the canoe with particular people. Mike and I have now done several races (The Gorge, which is a blur for reasons explained here, Da Grind, and now SSP) and I like paddling behind him. Rob is another I've paddled with enough to get comfortable with. And Naomi is one of my favorites to paddle behind because when I can model my stroke on hers I feel like I'm paddling better. She's got great technique and is strong too, probably stronger than I am. Most of the others in my canoe for this race were folks I'm not as familiar with, but there were times when we clicked, and boy does that feel great. The canoe jumps under you and it feels easier to paddle when you're cruising well....
Posted by pvz at 6:45 PM