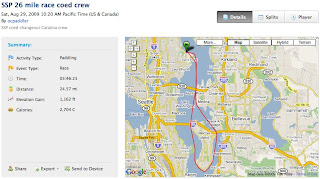 9/13/09 -- edited to add the above map of the Catalina Crew race. Ours would be fairly close, except we were at it longer.

The race was a lot of fun. And my concerns about actually successfully getting into the canoe from the water ended up being non-issues. I won't say that I was graceful. Watching people like Garrett who can lift themselves up and swing right into the seat makes me realize just how far from that kind of smooth I am, but I was able to get myself in fairly quickly on every change. I used the "leg hook" every time, which involves grabbing the gunnel with both hands and then letting my legs slide back toward the stern of the canoe, then lifting my heel and hooking it over the edge, ending by rolling in and climbing up. It's a valid approach, and it's what I defaulted to after I started having real issues with my ribs. And it worked.

Something I noticed: the change-outs seemed easier in the race than in practice. Maybe there was less time to over-think. Or maybe the practice paid off. No, it definitely paid off.

My ribs ended up not being a problem, which was wonderful. I don't know if it was adrenaline and/or Aleve and/or enough recovery, but I felt I had pretty much full range of motion in my paddling, and little problem getting a full breath. It had been a long time since I was able to paddle w/o feeling like the ribs were impeding me.

My biggest issues during the race were a tightening lower back (over time) and near the end, a painful right rotator cuff. I'm not sure if the shoulder resulted from a bad pull-up on a change-in, or if I was doing something wrong for a bit when my right hand was the high hand on my paddle (when paddling on the left). In any case, I managed to get through with it, and have been icing a lot since, and it's getting better.

One of the nice things about paddling has been that when I do it right, I don't have the shoulder problems that I've come to expect when doing swimming workouts. Which means I can work to exhaustion w/o feeling like I'm doing damage to myself. I discovered pain in the shoulders after some change-out practices, so it could well be that this came from the effort to pull myself up and into the canoe.

The other problem I ended up with was hot-spots on both heels. I knew this was happening, and I even duct taped the bottoms of my heels before the race because I'd felt the issue in seat 3 on Thursday. But the tape fell off during the first change-out.

The bottom of the canoe has sand embedded into the floor. This provides traction for feet (there are no foot rests or brace points in the canoe, and you drive a lot of your effort down through your feet). Unfortunately, there are also pebbles and raised spots in some of the sand, so if I'm paddling for 48 minutes in a seat, my feet rub on those spots. I have hot spots on both heels and on the side of one foot because I started bracing against the outside of my foot when the heel rubbed raw. These spots have now broken open and are prime candidates for infection -- thus, I'm skipping practice today and probably won't make the women's practice tomorrow. I'm treating the spots and hoping that on Thursday I can get back into a boat.

One small disappointment for me, maybe the only disappointment of the race, was that afterward we discovered the rear (and maybe the forward) iako had gotten skewed out, so the front of the ama was further from the canoe than the rear was. The iakos are the arms that attach the ama to the canoe, and they need to be firmly fastened to the canoe (and to the ama).

I'm fairly certain this shifting happened part way into the race and because we did some last minute adjustments for positioning of the ama before we put the canoe into the water. I think the straps slipped and we didn't notice and even though we tightened them down, there was enough slack in them that when they slipped back into place the iako had space to shift.

The reason this disappoints me is that we paddled damn hard, and I'm curious just how we might have done with a properly rigged boat. It's not a huge disappointment, but maybe we would have been within sight of the first SOCC boat? And maybe we wouldn't have had as many of those "what the hell's dragging?" moments during the race? How far behind the Catalina crew would we have ended? I think they finished in about 3:45 and we finished in 3:52. Close, but not as close as I was hoping for.

The race left me exhausted and feeling good about having done it, having been fairly well prepared (I had enough gas in the tank to push for the last shift and keep pushing across the finish line). It also left me feeling good about the people on the team. What cool folks there are paddling for SOCC. I think it's a damn great group. Every time I spend a day racing with SOCC I feel more connected to everyone in the club, and that's cool too. It's been a great experience for me so far, and I hope to continue it for some time.
Posted by pvz at 9:34 PM