Disclaimer/note: I have/had all sorts of plans/ideas/intentions for writing up a summary of the last few days, but so far I've failed to come up with anything that anyone will be interested in reading, so I'm punting on that for now and just giving you a recap of the morning.

Monday Monday... and M has an 8.30a meeting, which means I'm dropping the girls off. Which means that if I'm a bit too late, I miss the 9.15a water taxi run, and the next one isn't until 10.30, which puts me to work sometime after 11a. And given that I already worked a funky schedule last week (see the posts I haven't completed nor posted for more information), I can't afford any more short days. 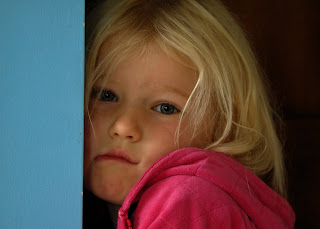 So I'm up at 5am, M at shortly after 6, and we're making lunches and planning strategies and and and.... until it's nearly 7 and I say that I'm going to grind coffee now, because the girls should be getting up anyway, and M agrees. And I reach into the drawer while simultaneously recalling that the last time I ground coffee (Sunday morning - another stellar experience about which you should read yet another of my unfinished and unposted tales) I realized that we would need to stop and get more that same day (aka "Sunday," alias, YESTERDAY!).

Slowly, I lift up the jar and shake it sadly.
me: Uh... we're short on beans.
M (who has not been grinding, so has no blame in this): Oh....
me: I can squeeze out 2 cups. I'll make you one.
M: No, you can have them.
me (magnanimously): Nope, I'm making you one. It was your birthday on Saturday and you spent the day cleaning the house and doing chores, so.... (see that other post I never wrote).

And so we each have a single double shot of espresso, where on most normal mornings we would each have 3. In a fit of generosity, I also make M a mug of tea to go, while making myself one.

Later, after she's driven off, only to call to say that the emergency brake light won't go off, and she comes back and I do what I can to fix it (pulling the lever and letting it go - pretty much exactly what she'd done already), and we determine that the brake is *probably* not still on, even though the light is bright red on the dashboard, I try to get the girls to eat some breakfast.

And at this point I'm 20 minutes away from my target blastoff, a time carefully calculated to allow me time to get to the water taxi dock in time to catch the 9.15 boat. K seems to have eaten enough to get by. L seems to have eaten enough to feed a family of gnats for maybe 2 minutes, after which they'd all collapse with hunger. But I'm not going to cave and give them either a breakfast bar or a cookie (I'm saving the cookies as incentive to get them into the van). So I tell them I'm heading up to take my shower and they should come and get dressed when they're finished eating, because if we can get out of here by 7.50a they'll get to have a cookie in the car. And I leave them there in the kitchen and go start my shower.

A bit later (longer than I would have hoped) I hear the thunder of little feet coming up the stairs. And the girls appear, both in their nightgowns, with L carrying her annoying kitty-shaped keyboard that has functioning keys but which she prefers to use to play canned (and horrendous) songs about kitties. She settles on the bedroom floor and starts to "play" while her sister dances in front of the mirror.

I call out to them that they'll need to be dressed and ready when I get out.

They don't seem to hear me.

I call out that I'm nearly done shaving.

L starts singing an ad hoc song about "daddy shaving in the shower." Her sister keeps dancing in front of the mirror. (Note: Possible profession - exotic dancer? Only acceptable if she does it in a flannel nightgown like she currently is!)

I call out that if I'm ready to go before they are, they don't get cookies in the car.

L tosses her keyboard aside while K quickly pulls her nightgown off.

And here's where I'm conscious of just how tenuous this whole morning is. As long as I can keep the mood light, without any obvious stress, everyone keeps their heads above water.

Example: L struggles with her nightgown and can't get it off over her head. I quickly dry off, call out that I'll help her, and we get it off together. If you blink and show any annoyance or stress, it all collapses in a pool of sobbing.

Example: L decides, once we're downstairs and getting shoes on, that she doesn't like her shirt. I say that's fine, we'll find another one, and she heads upstairs to get one (after we take the other one off together). K says "why does L always decide to change her shirt?" (here's an opportunity to sigh and say "I don't know!") I poke her in the belly and say "You used to do the exact same thing!" with a smile before racing upstairs to help L who's now yelling that she doesn't have any long sleeved shirts.

I pull out a couple and she decides on one and we're off and running again. Until we get downstairs where K is standing with her shoes on, and L sits down and says "Oh, these socks aren't going to work!" and I say, "Ok, let's go find another pair," while studiously avoiding the sound of eye rolling coming from the general direction of my other daughter.

Almost miraculously, we find another pair of socks (thank you laundry lady!) and then we're out the door and into the van where:
We've already decided NOT to take coats, even though it's raining now for the first time in 48 days (literally - we were something like 2 hours or 2 days from setting a new record, but I'm getting off track here....) because as K explained it to me, "You see Dad, if I have a coat I don't have room for anything else." Oh, ok, you've convinced me.  (For what it's worth, and in the spirit of full disclosure, while solo parenting last week (one of those posts you missed because I haven't ever finished writing it) I didn't bother with sunscreen even though it was sunny and warm and we hadn't had a drop of percipitation in like, 45 or 46 days.)

me: I may miss the water taxi, and then I won't be able to paddle.
L (curious look on her face): Daddy? Do you want to paddle?
me: Yeah, I like to.
L: Why do you like to?
me: It gives me exercise. I enjoy it.
L: Can we eat our cookies now?

I start driving (after giving the girls their cookies) and my phone rings to let me know I have a text. Which I read after digging the phone out of my pocket whilst narrowly avoiding the cars parked on either side of our street. It's from M, who says "I got coffee! How'd drop off go?"

The girls want to know what it is and I tell them.

L (laughing, with cookie in her mouth): We haven't even gotten there yet! How can we be dwopped off already?!?

I know M was asking ahead of time because she's heading into a meeting, but I don't bother trying to explain, choosing instead to laugh along with the girls and say "I don't know. That's silly!" thereby buying myself a small bit of cred with them since even I know you can't say how drop off went when YOU HAVEN'T YET DROPPED THE GIRLS OFF! They'll explain it to their mother tonight.

It's now 8.10a and I'm about 20 minutes behind schedule and have lost an additional 7 seconds by slowing down while reading the text, but I'm doing my best to 1) keep it light, 2) not reply, and 3) not stress out about the water taxi. If I miss it, I miss it. And I don't paddle.

And we do manage to keep it light, all the freakin' way down to White Center and their school. And I drop them and call out I love them and then drive back and just miss the 8.45 water taxi run but have enough time before the 9.15 run to get a double shot of espresso across the street. And take my picture. 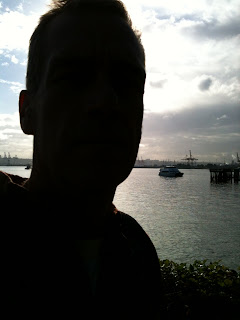 silhouette, with the 8.45 water taxi leaving behind me