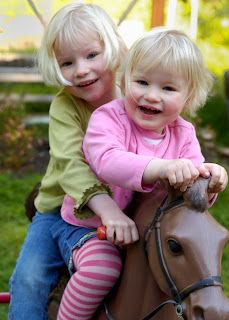 West S(e)addle Club
(second season)
It's funny how a slight shift in perspective puts things in a different light.

There I was on a(nother) rainy sunday morning, with the girls parked in front of Saddle Club and me scrambling to get a million and one things done. Not enough time in the world to do it all, and not enough uninterrupted time to really focus on anything. Not. Enough. Time.

I scramble to sop up water, determine that it's not coming from outside in spite of the sodden ground, determine further that the machine itself is leaking, open it up and find the seal has come loose from the door...

All that lack of time and too many things to do.... Yet somehow there is time to sit in a cold puddle of water on the concrete floor and struggle to put the seal back on the washing machine door. Funny how that works.
Posted by pvz at 4:44 AM