Here are two pictures from my past (plus a bonus picture), all of which tap into strong feelings I have about the place I was lucky enough to spend my high school years:

This was Margaret and Colin's home, a magical (to me) 5+ acres of quiet north shore beachfront on which there were dozens of coconut trees, some huge monkeypod trees, a banyan or two, and several cottages along with the main house. Here they raised their family and, as we reached high school age, invited us in to join them.

Kim moved in to start her freshman year in high school, and I did the same 2 years later. A year after that, when our parents separated, Mom and Karol came over from Oahu to join us. Kim and I lived in the main house. Mom and Karol lived in Kanani Cottage but were over for most meals and evenings (in my memory).

After living on Oahu, where the pace of the city (seems ridiculous now!) felt overwhelming to my plantation-bred sensibilities, being back on Maui and in Spreckelsville was like going home in the best possible way. The Camerons really took us in and made us a part of their family, and I've always been immensely grateful. They treated us like their own kids, and among other things, helped pay for our schooling. Margaret had grown up relatively poor in Hilo, and went to school on a railroad man's scholarship (her father worked for the railroad there). What she told me regarding the help she gave me was that she'd been the recipient of help, and if I was ever in the position to help someone else, that's what she hoped I would do.

Maui, especially the central valley, can be quite hot and dusty. (I've heard that 19th century sailors would find the islands by sailing east-to-west down south, and when they saw the plume of sandy dirt blowing off the central valley, they knew they could turn north and hit the Hawaiian Islands.) But the Cameron's property had a calm, cool, protected aspect that felt like a retreat from the busyness (!) and heat of Kahului town. I loved it there, and this was the "home" I went back to whenever I came home from college. 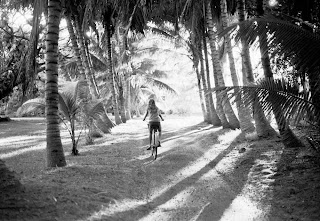 The afternoon light coming through the coconut trees, the Ironwood needle-strewn driveway, the peaceful feeling that place held on even the least peaceful of days.... 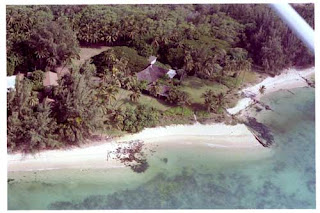 600 Stable Road, from the air
(July 1977)
In 1977 Margaret gave me four hours in Bruce's airplane as a birthday present. He took me on 2 flights, one circling west Maui, the other circling east Maui. On the second, we cruised over both Spreckelsville and Kuau and I got pictures of both houses. Neither place looks the same any longer.... but then nothing really stays the same, does it?

We spent so much time on these beaches, and back then, the only company we had were the occasional fishermen when the timing and tide were right. I'd see an outrigger paddling past, heading down to Kahului Harbor now and then, a team working out before a race, and beyond the reef, barges pulled by tug boats coming from Honolulu or Hilo.

I also spent a great deal of time on the beach with my guitar and Debbie, my dog. I was a moody kid in high school. No one understood me (I thought). Except Debbie (I thought). Luckily there was a beach to retreat to, to get me out of everyone's way. 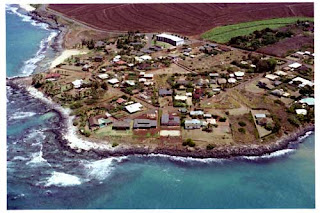 I think mom's yard looks green in this photo--it's the one on the right on the point w/ the "L" shaped house on the left. look how undeveloped it all looks!kvz

I suppose it depends on what you mean by "green."

Being color-blind, I have my own particular meaning, which is, it's the house immediately mauka of the small tree along the beach.