We've been doing some good, hard workouts in the canoe lately. Doug's coming with workouts designed to improve our stamina and our overall conditioning. They're a challenge, but they exhaust me in a good way, a crawl out of the car and into the house and into bed sort of way.

Last Thursday we paddled for over 15 miles, doing 3/6/9 sets (1 minute warmup, 3 minutes hard, 1 easier, 6 hard, 1 easier, 9 hard) across Lake Washington just south of the 520 bridge, then turned south along the shore because it seemed the wind had backed off. We paddled south until we nearly came to the north tip of Mercer Island, then turned west. By then the breeze had come back up (from the north) and we were slogging into it as it blew chop over our starboard bow. The sun went down behind the ridge between the lake and downtown, and Doug had us head up more into the wind (Pamela was steering). That improved the ride, but it was starting to get dark and cold and we just kept paddling toward the west end of the 520 bridge, then under it and on toward Montlake, pushing through the cut and under the Montlake Bridge, where our last set finished and we floated for a bit, gathering our strength for the remaining mile or so back to the beach. Bumpy and in fading light, it was a bit cold and a bit exciting, but good hard work.

Here's a map of our workout: 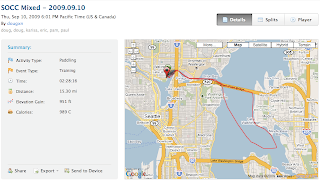 On Saturday we did another challenging workout, this time in beautiful, warm weather. Summer was back, briefly, and we paddled south along the west shore of Lake Washington, under the 520 and I90 bridges and on down to the Stan Sayers hydro pits and back. It ended up being 17+ miles (with warmup) of 5x5 / 5x2 / 5x5 (1 minute warmup, 5 hard, 1 easier, 5 hard, 1 easier, 5 hard, 1, 5, 1, 5 then 5x2 minutes sprinting, then another 5x5). We didn't make it past the first 2 or 3 of that last 5x5). We had a break (it was nice enough to hop into the water for a quick swim/cool down) and repeated the set as much as we could heading back north.

There were dozens of boats anchored on the east side of the cut, there for the UW football game. We did our second set of 2x2 sprints back and forth in the bay east of the stadium to avoid the traffic, then headed in through the cut (marching band playing outside the stadium) and on under the University and I5 bridges, going past our beach to finish up our last 5minute segment .... exhausting but it was good, and I think these sorts of workouts will pay off next weekend. 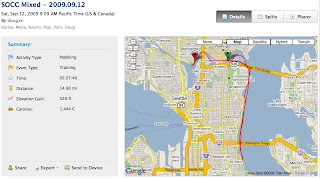 We're doing another salt water race in Mukilteo next weekend, the "Race Around Hatless Island." It's a 12 mile iron (no changing of paddlers) and we've got both mens and womens teams, so 2 boats possibly racing at the same time. Should be a ton of fun, and exhausting too.

Meanwhile, our Catalina crew did Catalina on Saturday, while we were crunching on our 5x5 sets.
Posted by pvz at 8:47 PM