it's been a long cold lonely... summer?

(photo credit: stolen from Jocelyn Ritchie. That's her, third from the left. -- thanks Jocelyn!) 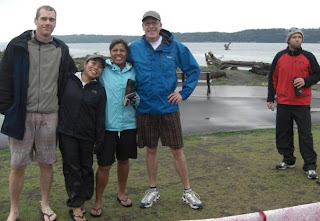 There's a chill in the air this morning, though the sky is clear. It feels like fall, and that seems fitting because yesterday we finished up the summer paddling season with the "Hatless Island Race" up in Mukilteo.

On an overcast and decidedly Northwest feeling day (it'd been raining since early morning but stopped long enough for us to race 12 miles), the SOCC men paddled to a 4th place finish, while the women surged to a 2nd place finish among the women.

I'd been confused about the name of this race because I've seen it both as "Hat Island Race" and "Hatless Island Race." It turns out that it used to be the Hat Island Race, but they rerouted it a couple of years ago so that it doesn't cross the ferry path between Mukilteo and Whidbey Island. So now instead of being a 15 mile loop around Hat Island, it's a 6 mile run down the coast, around a buoy and back again, a "Hat Island-less" or Hatless Island race.

Friday was beautiful. It felt like summer again after some hard rains. Early Saturday morning it started coming down and kept raining until about 8.30a, at which point we were rigging the canoes. This was the first race I'd been at without Sabine. She's the mainstay on all things outrigger, so having to rig without her added a new stress for me, but at the same time I learned more about rigging this time than ever before. Mostly Rob and Jasen and Doug did the rigging (I think), but I helped and managed to do more than in the past.

The water was slightly lumpy from a north-northwest wind, and there was a fishing derby going on in the middle of the channel between Mukilteo and Whidbey, which meant both lots of boats, and lots of boat wakes. We were advised to stick to the east side of the channel to stay out of the way of boats.

We all launched, and because there were few enough entries in each division, we all raced together. In our canoe Rob was in 1, I sat in 2, Doug in 3, Zachary in 4 and Erik in 5, with Jasen steering. We practiced one start, a quick digging out by sprinting for 4 changes of 16, then shifting to strong, long pulls. Then we got in position and waited.

The starts on these races seem to be somewhat loose. There's generally a starting line marked by at least one buoy, and the canoes are supposed to be behind this until a green flag goes up. A chase/escort boat bobs around with a yellow (?) flag up. If any canoes are over the line they raise a black flag and you're supposed to back-paddle until you're behind the line. In theory. In actuality things are kinda loosey-goosey. Island-style I suppose. We all bob around, current pushing us south (and over the starting line), while the escort boat holds the yellow flag. Or is it red? Doesn't matter. I'm not supposed to be watching. It's the steersman's job to pay attention to that and to call "Paddles up!" when the yellow (red?) changes to red (yellow?). I'm supposed to be sitting in my seat, holding my paddle up and ready to dig in, waiting for the "Imua!" call from the steersman. Focused forward, a tightly-wound spring ready to GO! A green flag and we're off. That's the theory.

When the green flag went up, we dug hard and got off to a good start, second or third in the pack. We stayed in third for a mile or so, then were passed by a Kikaha boat. We kept in reach of them for most of the 6 miles south, even overlapping them at times, but mostly a few boat lengths behind. So solidly in 4th. I could sometimes hear the boat behind us, but never had a chance to see them, and they didn't seem to be getting much closer.

It was a good paddle down, with the wind at our backs, and the chop helping to push us, along with a changing tide. I worked hard at working hard, while trying to keep in sync with Rob. There was only one point at which Rob switched from a regular stroke to a quick stroke, and caught me off-guard. I hurried to catch up and he switched back to a longer stroke again. Behind me Doug yelled "You guys are all over the place!" And we were. (Later I mentioned that to Rob and he said "Yeah, my back was seizing up!" I'd thought he'd done it intentionally, though I couldn't for the life of me figure out why.)

We passed the shipwreck that marked the approximate 5 mile point, then continued on for what seemed like more than another mile to the turn. Coming around the buoy we were now heading into the waves and the wind, and the paddling was distinctly more difficult. I wouldn't say it was as crazy as the Gorge, but it was noticeably more difficult than coming down. We were working against wind, waves and current now, and it sometimes felt like a real slog. Everyone else was in the same boat (eh hem), but we were slowly losing ground to the 3rd place Kikaha canoe.

Several times our ama popped up out of the water as swells and wind hit us from the port bow. At some point Doug called up to me that I needed to watch the ama (which is attached to the iako which is attached to the canoe behind seat 2) when I was paddling on the left and he was on the right. Usually the 3 and 5 seats are responsible for the ama because both of them sit immediately behind the iakos and it's easiest for them to lean onto the iakos if the ama starts lifting. But of course, if they're paddling on the right side it's pretty hard to get back over and lean in the other direction quickly, so it makes sense that if conditions warrant, the 2 and 4 paddlers should be aware of the ama as well.

The trouble is that I'm a bit gun-shy about amas and swells and huli-ing and da kine li' dat. So now that I knew I needed to be watching, it took my concentration away from paddling a bit, and I think my form and effort suffered some. There were a couple of times when I actually leaned an arm out onto the iako while paddling on the left. Probably an over-reaction. Most likely an over-reaction. But like I said, I'm a bit gun-shy. And every time Doug called "Hut" and I got to switch back to paddling on the right, it felt like a vacation because he was now responsible for the ama.

The best thing you can do in conditions like we had is to paddle strong and keep the boat moving forward. If you feel the ama lifting, a hip-check to the left, throwing weight onto your left butt cheek, is a quick and effective way to shift weight over. But still, I couldn't help myself.

We made it, though a particularly steep/large swell caught us about 30 yards from the finish and all I could think was, "Man, it would really suck to huli this close to the finish line!" We didn't, and when the horn sounded I was relieved. I hadn't had a drink of water the entire race, though I had my CamelBak around my waist the whole time.

So, we finished 4th, a strong 4th, and the 5th place canoe was quite a distance behind us. That felt good; knowing that while we were losing ground on 1-3rd places, at least we were putting water between us and the folks behind us.

Our women's team paddled in a bit later, looking good and strong. I aspire to look as good when I paddle as they all do -- they always look long, focused, in sync.

It was a nice way to finish the year: we were competitive for a good part of the race, within striking distance of the first 3 canoes for 6 miles at least, and getting splashed with salt water while paddling feels great. Our improved conditioning has made a difference, as has our increased experience paddling together.

I still feel I have a way to go to get properly conditioned. I didn't feel like I was as strong as I'd like to be during the race, and I let the conditions get to me more than I'd like as well. But it was a good learning experience, and every time I race with the team (men and women) I like the people more.
Posted by pvz at 10:57 AM