I've been listening to the "Brown Gabby" album, and I wanted to talk a bit about it because this particular album is a very important one to me. For several reasons.

Gabby Pahinui is one of the seminal 20th century Hawaiian musicians and entertainers. He played music beginning shortly after WWII, largely as a pedal steel guitarist, but was "rediscovered" during the Hawaiian cultural renaissance in the early 1970s, and .... rather than go any further into it, I'll just link to wikipedia. (Somehow it seems fitting that wikipedia is named after a Hawaiian word.) 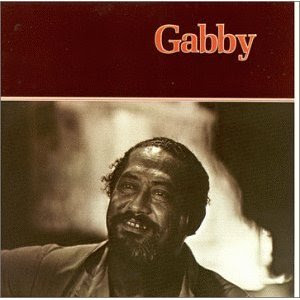 But about the "Brown Gabby" album, sort of:

My parents both enjoyed Hawaiian music and Dad especially liked to play ukulele and sing. He (and Mom) participated in a "Hawaiian Sing" group, friends who gathered regularly to play and sing Hawaiian music (and drink, I suspect). It was something I was vaguely aware of as a kid, and I heard plenty of Hawaiian music at home, but by junior high when I was playing the guitar a lot, I was a typical teen and not particularly interested in Hawaiian music, especially old music ("old" = stuff my dad was interested in). So even as my skills on the guitar increased, and even as Dad tried to spend time with me by inviting me to join him at Hawaiian Sing when I was visiting on Oahu, I had no desire. And so I never did.

Just writing that makes me a bit sad.

It's one of those things I kick myself for now. Partly because by junior year in high school, spending time with friends, visiting regularly in Hana and getting more direct exposure to island culture, I grew to appreciate and love the music. And partly because, what a wonderful opportunity to share with my dad what we both loved! They say school is wasted on the young. I think sometimes parents are too, especially if parents aren't around for long. Dad died in 1996, and I had grown up enough by that point to thank him for some of the many things he did for me, but this wasn't one of them. At least not adequately. I do know he appreciated hearing me pick up his ukulele and noodle around on it during my last visits with him in Kamuela. Dad, I appreciate those offers now, though you never would have known it at the time....

First, it's "Brown Gabby" in quotes because that's not the official name of the album. I think it may simply be "Gabby." And it was mostly brown (see the picture above). Sort of like "The Beatles" is known as "The White Album." Sort of.

Second, it's an album I "discovered" in 1977 but which had come out in 1972. (Here's what Amazon says about it: The album was instrumental in beginning a resurgence in native Hawaiian music upon it's release in 1972. ) Which is about the time I was discovering the Rolling Stones and listening to a lot of Beatles and Bob Dylan and not especially aware of things Hawaiian, except through unavoidable exposure in our home, an exposure that, in retrospect, I am grateful for.

I loved the Brown Gabby album, once I'd found it, and I played it a lot for the next few years. I took it to college in Colorado and Providence and carried it back home when I returned. Then I moved to Seattle and I brought it with me here as well....

Then in 1995, during a particularly difficult time in my life, when I was living alone in a small, dark and cold house in Madison Valley, miserable and feeling especially sorry for myself, Mom mailed me a CD of one of my favorite Hawaiian albums. I think she did it on a whim, knowing how much I was hurting, and wanting to someway let me know things would get better. And they have. Immeasurably better. But just getting that album meant so much to me. I'm not sure she realizes it (which makes me think that I probably didn't adequately communicate this to her), but it felt like a life saver at the time. Here was music that took me back to the sunshine and warmth and comfort of Maui, back to local rodeos in Hana and sleepouts in Makena and hikes through the crater and body surfing and being with high school friends I could count on and who mattered to me. Talk about a lift!

Imagine a lonely local boy, feeling abandoned in dreary Seattle, getting an unexpected package in the mail, a package containing this album. I treasured it, as much for the circumstances in which I got it as for the music on it. It brought a lot of sunshine during those dark months, and though I don't listen to it every day, when I do listen to it, it reminds me of both my parents: Dad for his love of Hawaiian music and his passing that love on to me, and Mom for somehow knowing this particular album could take care of me at a time when few things could. And it reminds me that the worst of times are transitory, and that better things are coming.

It also makes me think ahead and hope that I remember during the tough teenage years that the girls may actually look back and think about things they got from me, from us, and be grateful. And I hope that I'm tuned in to my daughters enough to sense when they might need a small surprise, arriving unexpectedly to bring a little light into the present darkness.

Thanks Mom and Dad! 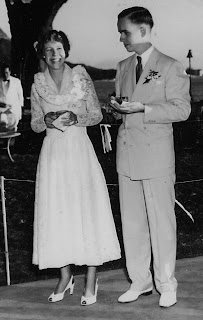 Wedding reception
Halekulani, 1952
(looking so, so young)
* this phrase is from Royal Hawaiian Hotel, a song on the Brown Gabby album, and means, roughly, "true beauty"

And, if you're a glutton for punishment, here are a couple of links to earlier posts about my parents (nothing that adequately captures all they did and have done, nor all I feel about them, but what the hell....:

Wow - not a dry eye from this reader! Kelly bought me a ukulele, but I've been terrible at learning. Perhaps a lesson sometime!

I'd love to "teach" you, though for anyone w/ music experience, it'd be more like a play-along. It's not very difficult....