Last night was another small boat workout with "the Dougs." I paddled with DougN in his OC2 while DougM and MikeM paddled the club OC2. It was sunny with a breeze from the south and we went out Montlake Cut and south on Lake Washington.

At the beach I told Mike, "The last time I was out with DougM, we went to I90." He said, "You trying to frighten me? Because you are!"

I didn't know if we would be doing that because I wasn't sure of the conditions. It had been blowing from the south, so had the potential to be pretty lumpy, but when we got out beyond the cut it looked pretty good. A decent wind from the south, but the water was only choppy, not really bumpy. And we went to I90 (and beyond -- to the "Y-dock" which is apparently called that because of its shape, not because I was wondering "why are we going there?!?"): 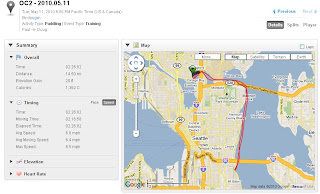 14.5 miles on a gorgeous night
The thing I like about doing these workouts, besides being on the water (and man, I love being on the water -- now that it's getting warmer and brighter and staying light later, it's glorious to be out there!), is that every time I go out I get more experience in a variety of conditions.

I think if I'd been in an OC1 I would have been paddling somewhat tentatively, but with Doug the boat felt good and stable and we powered through the chop. It felt good to be working hard in the water, with the boat cruising along, slop occasionally splashing into my lap as we busted through or over a small wind swell.

My back has been hurting me a little, but I'm happy to say that I didn't feel it at all last night, and I was able to push myself a good deal. I did feel it later, when I crawled into bed, and I feel it now a little, but mostly it feels tired and worked, not in a bad way.

This was one of the more enjoyable paddles I've done recently. I wasn't sure how I'd feel on it, given that I'd been off the water for a week, but things went well. I was worried about my conditioning, and I felt the effort, but luckily we did a reverse pyramid with 1min breaks between each piece (so 8min/1min off/7 min/1min off....). Those "off" minutes really helped me recover. I think we did the set 3 times. I wasn't counting. I was paddling in 1 and trying to focus on technique and to not think about the next few weekends.

We've got sprint races coming up this weekend and then again on 5/29, and I don't really feel ready for them. But I don't know that I ever would either. I'm not sure sprints are my best venue, but it should be fun, with the exception that I'm likely going to steer the mens' boat on 5/29, and I feel woefully under-prepared for doing that. Still, it's an opportunity to learn, and where better to learn than on Greenlake of all places. Whatever the weather, it's not going to be too lumpy out there.

And I'd love to know the basics of steering. I'm not sure how well I'll do, but I think it's important for everyone in the canoe to understand what it takes to steer, and to be able to help out when necessary. (The things I read about open ocean racing make it clear that when you're in big water, the steersman frequently needs help from #5, as well as from #1 and 2 (at times), and that the more people in the boat who understand steering, the better.)

I'd like to be an all-around resource in any boat I'm a part of. I'd like to be a guy that can hop into any seat and acquit myself well, and learning how to steer is part of that. (Being comfortable rigging the canoes is a part as well, and I've got some work to do there as well.)

I was getting worried about the whole steering thing when Melissa and I exchanged email in which she encouraged me. And I've been through this all before, so won't beat a dead horse. Any more than I already have.
Posted by pvz at 4:55 AM