So, in the spirit of lateness, and to honor the 100th Anniversary of the Boy Scouts, I offer this photo of my future eagle scout dad in front of his "Best Tent": 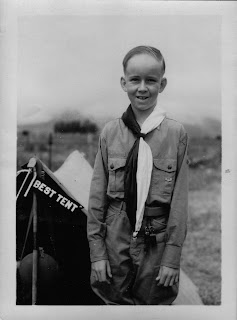 Dad, August 1938
This would be somewhere on Oahu, but I have no idea where. It's one of many photos* we never saw until after Dad died.

I have mixed, relatively negative feelings about the BSA. I was in the Cub Scouts back when I was a grade school weenie. Can you imagine anything less fitting than a bunch of island kids learning helpful tips like looking for moss on the north side of a tree when lost in the forest? Um... moss? On coconut trees? Um.... which way is north? I know mauka and makai, but north? I know Diamond Head and Eva, but....

(historical digression: shortly after martial law was declared in Hawaii following 12/7/41, No Parking signs were installed in downtown Honolulu. Apparently they were initially posted saying "No Parking East of here" and "No Parking West to corner." Dad told me that no one understood what this meant and that they had to be replaced quickly with phrases islanders could understand: "No Parking Diamond Head of here" and "No Parking Eva to corner." It just doesn't make any sense on an island to do compass directions. You go down the coast 10 miles and even though you're still in the same position relative to the water and the mountains, you go from heading west to heading north....)

Add to this cognitive dissonance the fact that by the late 1960s the Cub Scouts and Boy Scouts had started looking a bit like breeding grounds for little fascist Nixonian minions. At least they did to me. Here I was listening to Country Joe's "Fish Cheer" from the Woodstock soundtrack, and yet I was expected to dress in my pseudo-military uniform (w/ shorts!) and pledge myself to "god and country, to be square (you can imagine how that went down in 1969!), and to obey the law of the pack." Cripes! I hate packs! I distrust large groups of people, especially people trained to obey someone higher up rather than to think for themselves! Let's just say I figured out pretty quickly that I wasn't cut out for the military, and from my perspective back then, the Scouts seemed pretty close.

Our big moment as a "den" was when we were part of the crowd control for an LBJ visit to Honolulu. I remember standing in the sun for hours, and then standing along the street holding hands with other little 8 and 9yo scouts, until the motorcade was safely past. I'm not sure what they expected us to do in the event of some disturbance. Luckily nothing happened.

I quit after a year or so, shortly after our Den Mother switched from a self-proclaimed "witch" to someone I assume was more socially/politically acceptable.

In retrospect, I wonder how Dad felt about my rejection of the Scouts? Was he disappointed? Did he wish I'd gone on to be an Eagle Scout too? To his credit, he never once complained or pushed me (that I recall). One other interesting thing to note: my father-in-law was an Eagle Scout as well.

The other (current) issue I have with BSA is their policy regarding gays. They don't take 'em. Way to go Scouts! Way to reach all kids and to teach good American values!

* Here's another wonderful picture of Dad, this time playing an accordion. Who knew?: 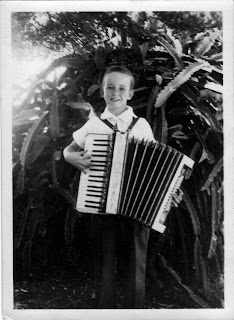 date unknown, but Dad looks younger than the 1938 photo.
(note the night blooming cereus in the background.
this must be in Manoa, possibly even on Punahou campus)
Posted by pvz at 4:56 AM