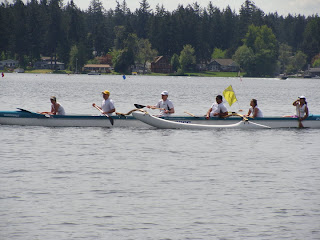 preparing for one of our coed races
(I'm 3rd from the left, Jocelyn steering)
Last weekend were our first sprint races of the 2010 season, and the weather was nearly tropical! Sunny and 70s and only a slight breeze. Of course, this was in Washington, so it was coolish in the shade, and the trees were all evergreens, but still....

My previous (and only) sprint regatta was last year's event at Silverdale. For those races I was inordinately nervous and felt largely unable to accomplish anything useful. This time went much better, though I'm still not convinced I'm truly a sprinter.

Kim came up from Olympia (I knew she was going to) and M surprised me by bringing the girls down (we'd thought K had a swim lesson that morning, but apparently it was the previous day). It was a lot of fun to have them all there, and to get the chance to introduce the family to various club members (and vice versa). 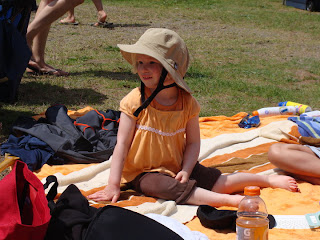 K, enjoying the sunshine
(and wearing my new hat from Justin and Maggie)
I did 2 OC1 races, both 500 yard races, and in the first (Senior Master Men) I took 3rd place. The race was in 2 heats and I did well in my own heat (1st) so was feeling good about that, but then Melissa called on Sunday morning to tell me that I'd finished 3rd overall. It's a good feeling, though my brain automatically goes into "here's why it doesn't really count" mode -- something about the way I am. Luckily I was in the 8th lane, which is rumored to have been set inadvertently shorter than some of the low numbered lanes. In any case, it's a good finish for me, having only been doing this for 11+ months. 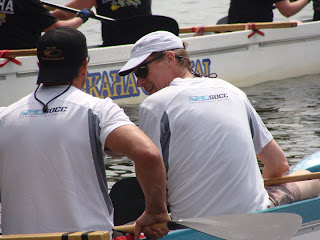 Steve and me
(prep for another race)
Our club as a whole did very well, coming in 3rd overall and taking home a trophy for that. Apparently as recently as 2 years ago, Sabine was the only SOCC member attending sprints, so this is quite a change. The women did particularly well, coming in 1st a number of times.

Unfortunately, I had to leave "early" (5p) to be home to help with the evening "calf wrestling" of girls into bath and jammies and bed, and then M and I went out to dinner (!). The leaving early meant I didn't do 2 of the races I was supposed to do, including the Masters Coed 1000, which I was really looking forward to. (They did just fine without me!) I also missed some bbqing/drinking/bonding time after the last races.

Many of the appealing aspects of last year's Silverdale sprints were there for me on Saturday, including the "local" feel and the general camaraderie of folks on the club. Only this time it was more so, because I now know and am friends with these people. Last year I was wandering in a daze, alone and somewhat lonely. I've now put in enough time that in addition to having some bonds with SOCC people, I'm starting to recognize folks from other clubs and even have conversations with them. (!)

The paddling I've put in with the Dougs over the winter feels well spent. Not that it didn't feel "well spent" before this weekend, but it's nice to see how it's impacted my paddling. I'm actually comfortable enough in an OC1 to do a sprint race (never had done one). And it didn't go badly.

On the other hand, there's so much I don't know about sprinting, including how to pace myself. My first 500 I did in 2.31.31, and my second was in 2.48.14 (10th place in the Master Mens 500). A part of that may have been the difference in lanes, but another aspect felt like I didn't let myself lengthen out at all on the second race. I paddling faster than I probably should have after the start. Rob was in the lane to my right, with DougM to his right. They both took off and I couldn't catch them (Doug finished in 2.40 and Rob 2.41). I had similar problems in the OC6 races, starting fast but not bringing the pace down once we were cruising. Luckily Steve spoke up in one race and told me to lower the pace slightly, which made me more aware of the while issue.

It's all learning, and it's all good. I just look forward to having more experience so I can start to get a handle on how to best approach a sprint.

Greenlake Sprints are coming up in 2 weeks, and those should be fun, minus the fact that I'm supposed to steer in several of the races. I'm nervous about that, but the only way to learn is to do it.... Jocelyn steered her first sprints this last weekend. She was quite nervous, which I could really relate to, but she did really well. And now she's an "old hand" at it, while I'm still untested. Yikes!
Posted by pvz at 9:18 PM