Sister Sunday - "where you lead, i will follow" edition

A tandem biking shot from our outing 2 weeks ago, this showing how both girls mastered the fine art of tight turns while crabbing at one another about getting in the way: 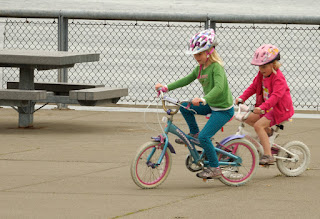 L following just a little too closely for K's comfort
Posted by pvz at 4:00 AM No comments: Links to this post

Today the girls did 3 (three!) outrigger sprint races together at Green Lake. 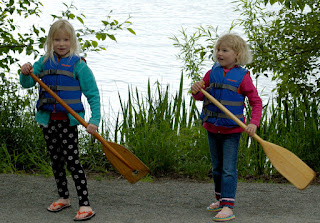 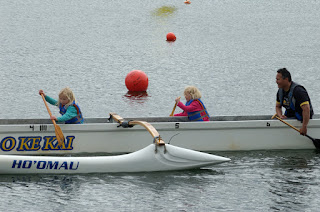 post-race, heading back to the beach

Posted by pvz at 10:10 PM No comments: Links to this post

(I could make all sorts of attempts at explaining where I've been and why there's been nothing posted for months, but what's the use. To quote a song writer I like "... it's life and life only." and that seems to be enough. Enough to distract me, to occupy me, to interest me and challenge me and keep me from writing.)

Yup, both girls have shed their extra wheels and are two-wheeling it through Jack Block Park a park near here whose name I can't tell you because we don't want it to be overrun.

I offer a photo as proof: 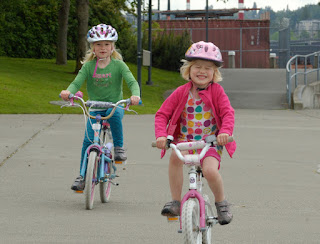 In a bit more detail, here's what happened:

Two weeks ago (on Mother's Day to be exact), the girls went with M and a friend to a nearby street that is almost flat, and there they took off their training wheels. Most of that hour or so was spent simply "scooting" which means pushing their bikes along and balancing as best they were able. And L took to it - she was balancing well enough to go the entire length of the street. K was doing fine too, but  didn't seem to have quite the balance of her little sister.

Then, near the end of the following week, M took the girls back there, and this time they started to pedal. When I got home from work there was much joy and enthusiasm because they were starting to pedal and were even able to pedal a few times in a row before quickly shifting their feet off and onto the ground.

So the following Saturday, while M took K shoe shopping for her birthday, L and I went to Jack Block Park and... there's no other way to describe it... she started riding. Honest-to-god pedaling and zipping around and when I suggested rather than stopping at the end of a long straightaway and turning with her feet, that she simply turn the bike while still pedaling, well, she took me to heart and man oh man did she "get it." 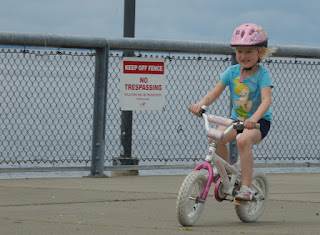 I have to confess that I was bursting with fatherly pride. I had just watched my youngest daughter take a huge step toward independence (of course, this is the daughter who needs no nudging in that direction, the one who feels she can do as she pleases, simply because she pleases). It was something I've never felt to that extent before, the pure joy and pride and happiness at her joy and pride and happiness. It was truly a highlight of my days as a dad to this point!

When we got home, M and K were back and we deluged them with tales of L's riding so K wanted to go do it too, and we (K, L and I) went back to the street where we'd started a week ago. L zipped up and down, her little legs pedaling as fast as she could go, while K struggled, clearly feeling that she should NOT be doing less well than her younger sister, so serious, so determined, so demanding of herself.

A picture is worth a thousand words: 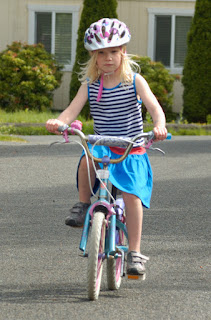 Unwilling to be left behind, even if it kills her

This was another illuminating moment for me, as a father. To quote my older sister, who was speaking from the perspective of an older sister:

the facial expressions really tell the story - L looks happy, free and proud; K looks like it's all hard work! As an older sister I can totally relate...

It was a slightly down ending to an otherwise thrilling day.

I was certain that, with a bit of time, K would catch up tob, so the next morning (one week after the initial "scooting"), M and I took both girls down to Jack Block Park, and the picture I started this long post with comes from that outing.

Both girls got going and had fun, and M and I enjoyed watching these two zipping back and forth. We even got into the act a bit: 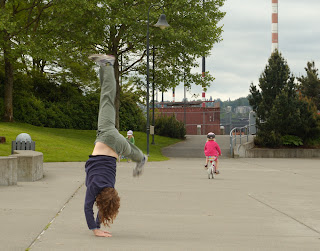 M, amazing us all with a couple of cartwheels 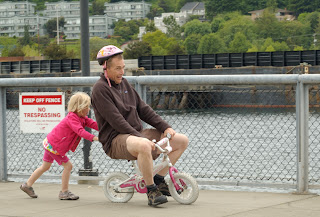 L, amazing us all by pushing me
(note the strain on the rear tire!)

It was a glorious morning outing for the family, and loads of fun for the girls, and for M and me. I feel we've turned a corner of some sort, and that soon we'll be sending them to the store for beer, or at least for milk....

Posted by pvz at 9:04 PM No comments: Links to this post