For more news, go elsewhere. This is another one of those paddling posts.

Tuesday night we did sprint turn practices, and it beat me up. I've been working pretty hard at getting into shape for the paddling season, but I've been doing that by paddling longer distances, which I tend to be more suited for (temperament? muscle type? habit?). But last night, sitting in seat 1 and paddling back and forth across Lake Union to round buoys sucked me dry.

I feel muscles I haven't felt in a long time. My chest is sore in a way it hasn't ever been during my long workouts. This is because one job in the first 2 seats is to reach out to the left and plant paddles when the steersperson yells "kahi" -- this helps pull the nose around the buoy. But it
takes strength in the chest and arms that isn't what I've been building. The other thing is, because of the nature of sprints (short in length), you've got to explode with power and speed and keep it up from start to finish. I'm not much of an "exploder." And "exploding" seems to use more arms than core muscles -- I should check with Sabine and Doug about this. Maybe it wouldn't be such a contrast if I can learn to sprint with my big muscles alongside my arm muscles.

To finish it off, we finished the workout in a cold rain/hail downpour that came out of dark clouds which had me worrying about lightning. We paddled back to the beach with hail lashing our faces and rain soaking us through, feeling the cold like it was January rather than May.

It was a good workout, but an eye-opener for me. Whatever conditioning I've built so far obviously isn't adequate for the sprint races.

We ended up doing a good job with the turns. First Jasen and then Murray practiced steering them, and Steve clearly knows a lot about steering, because he was able to give them good
instructions on how to approach the buoy and when to poke (which initiates the left turn). By the end of the practice I felt like we were swinging the canoe around cleanly and sharply with either steersman. So that leaves the business of paddling fast! Hmm.... 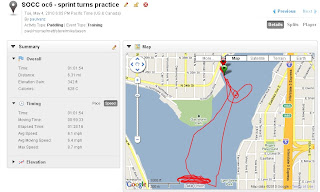 Our crazy-a@# track
(posted here to break
up
the
monotony
of the written word)
One other thing I remembered as we pulled the canoes up on the beach and my hands and knees turned blue -- I've only ever done sprints one time, last year at Silverdale, and I was so new and so inexperienced that it doesn't even count. Then too, I wasn't sitting in seat 1 or 2, so my only job was to paddle. Not that I did that particularly well, but it was less responsibility than the first 2 seats (or the steering seat).

We need a novice steersman, and Melissa and Sabine seem to be thinking that I could do that, but I feel so unprepared and so clueless that I've resisted. They actually wanted me to steer
some turns last night, but I managed to avoid it, with the weather's help. If the weather hadn't changed I might have had to, but I got off without it. The problem with having Steve do it (which is what I suggested), is that he's a big and very strong guy, and we both benefit from having him in 3/4, and would suffer from having such a big guy steering.

This issue gets directly to my personal issue of disliking being incompetent at something. Which is crazy.

When I think of either K or L not trying something because they don't know how to do it, I think "of course you don't know how! that's what you learn when you try it!" Yet somehow I don't seem to be able to give myself that same latitude. It's something to work on, especially as I'm now a role model of sorts for them (frightening thought!).

And when I think back on how I've learned things, it's by being willing to make mistakes (to "make a" as we used to say in high school, meaning, to make an ass out of yourself). The challenge with this steering thing is that there are 5 other guys relying on me, and I really don't like to let other people down.
Posted by pvz at 4:43 AM

As I said yesterday you need to get over yourself and just jump into it. If we know anything about the folks in our club, it's that they know how to support one another and tease one another. If you mess up horribly you can likely expect both! :) However, I don't think you could mess up that badly. Of course, that doesn't preclude both the teasing and the support anyway! Besides they will heartily laugh with you if you laugh first. That's how I do it. :)