two of us, riding nowhere... 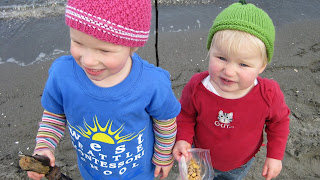 Watchers on the Beach

This weekend Zachary and I did our first OC2 race, the Ruston Way race. This was literally our second time in an OC2, and we both went into it with a goal of enjoying the race and (hopefully) having a paddle that felt good. Luckily this is a low-key affair, with nearly every participant earning a ribbon of some sort. And because it was so low-key, we felt we could give it a try. Also a factor -- Z's attitude. He's an easy-going but capable guy who knows boats and the water and is in good shape. An ideal partner for me. Oh yeah, one more thing about the race -- there's chicken long rice lunch at the end!

The race is 10.6 miles, 4 times down along the shore and back. I fully expected we'd huli at least once during the 10 miles, and if the conditions had been anything other than flat calm, we may have done so, but on Saturday we got through the entire 4 laps without any problems.

The Start
As Z and I paddled out, he wondered aloud if we should try to jump on the start, to really dig to get going quickly. "I have no idea what strategy is appropriate" he said. Well, me either. We collectively decided not to do that. For one thing, we had over 10 miles ahead of us, and for another, we had no idea how we stacked up to the other boats. It didn't seem like it would gain us much to really push right at the start.

So we started easily, just hoping to stay steady and strong. My real goal was to paddle so that it felt good the entire way. I felt that would lead to our paddling most efficiently. and to my surprise, we kept up pretty well with the lead boats (except the first 2 OC2s). That felt encouraging.

I was paddling up front, and because the rear steering cable had frayed, was also steering from up front. Z counted the changes.

First Lap
The first run down felt good and went more quickly than I'd expected. We talked occasionally: "How's that pace feel?" "Good, real good." Then we were coming up to the buoy and I took the first turn wide, not wanting to fight anyone for position. And now we were paddling back up toward the starting line, going into the very light wind. And we continued to keep up with most of the boats in front of us, chatting now and then but mostly just keeping at the paddling.

The thing was, neither of us knew what to expect of ourselves. Would we be able to keep up a decent pace for the entire race? Would we pace ourselves well? How tired would we feel at the end? The two OC2 boats ahead of us were a mens boat, and a mixed boat (with DougM and Sabine in it -- they were going iron, as were we. The other was a relay, though I didn't realize it at the time). So, we were 3rd as far as OC2s went. There were also 2 surfskis immediately ahead of us, and an OC1 that we were just keeping pace with. So far, so good. (There was another OC1 doing a relay, but I didn't ever realize that. I only saw them on the official results.)

Second Lap
After one complete lap I still felt pretty good, and Z said he did as well. We took the turn and headed down for our second lap and the water was beautiful, calm, smooth. There were almost no wakes or bumps of any kind, and so while that meant no lifts from swells going our way, there were also no swells threatening our stability.

The water, when it splashed off our paddles, was cold but not too cold. There was blue in the sky and salt in the air and the morning felt great. A perfect day for a paddle!

We made the turn at the far end of the 2nd lap and Z said "nice turn." This time I'd come tighter around the buoy, following the OC1 closely. There were no other boats to worry about. As we headed back on the return piece of that 2nd lap, I said "these 3 middle laps will be the hardest." I focused on keeping a regular pace and on reaching forward, making the forward part of my stroke the power piece, and recovering at my thigh/hip.

As we neared the start buoy we passed Doug/Sabine on their 3rd lap. I yelled out "Go Doug, go Sabine!" and Sabine called out "You guys are doing awesome!" They were still in 2nd place but were making up ground on the first boat.

Closing in on the start line again, the OC1 near us headed off to the beach -- it was part of a relay! One less boat to worry about.

Just before the start buoy, a wake caught us from behind, giving us our first (and only) lift. I felt us starting to swing left and ruddered right. I think we got a bit of a boost from it, but now I was most concerned that we'd be broadside to the wake as we took the turn. "Watch the ama," I called to Z, and we started left. An OC1 was sitting there at the buoy and just then he started out in front of us, crossing directly in our path.

Third Lap
"Hold up," I yelled to Z, and we stopped paddling. Our ama kissed the other boat which kept going. At the same time, the wake passed beneath us, lifting us from left to right, a little taste of what lumpier conditions would have meant. And then we started paddling again. One great thing about these boats is that they're so light, so a small bump like we'd had (in calm conditions) is nothing.

(Later, when I mentioned that I'd been concerned about the wake catching us broadside, Z told me he'd been leaning way out on the iako to counter the lift. In other words, he'd the situation covered. That's one of the things I really like about paddling with him -- he's a waterman and knows what to watch for and how to compensate. Lots of experience in boats.)

"What was that?" we both wondered aloud about the collision. "It seemed like we had right of way, don't you think?" I asked, and Z agreed. The OC1 was ahead of us, having gotten a quick jump, but we caught up partway down the course. I felt a little annoyed at what the guy had done, but decided I wasn't going to let it bother me. As we passed he called out "sorry about that" and we said "no worries." It felt better that he'd apologized.

Down the length, and around the far buoy, back toward the start the 3rd time. We were keeping our place in the pack, except now I noticed an OC2 coming up behind us that hadn't been anywhere close before. I heard them calling as we all paddled back toward the start, and it became a challenge to not let them worry me. It seemed like the worst thing we could do was lose our rhythm and start to hurry. If we did that, we'd shorten our stroke, lose our power, and probably tire ourselves out too soon. So that was what I focused on. Keeping long and strong up front, and not letting the fact that the other boat was gaining on us affect our pace too much.

Fourth (last) Lap
We rounded the start buoy for the last lap and the trailing OC2 was even closer. More effort to ignore them. Z and I kept paddling, and that continued to feel good to me. I'd gotten a bit fast on the previous lap, rushing a little, so now I consciously made myself slow down and reach out ahead and power my stroke only to my knee.

Salt water, calm seas, an easy-going but strong paddler behind me. The sun was even shining for a bit! It was really a blast and I felt in a zone. I don't really remember much about that stretch of the race.

Around the far buoy the last time and then it was a straight shot up to the start. We could hear the other boat behind us, still there, but closer than ever. Gaining with each lap. The OC1 we'd hit was nowhere to be seen -- we'd left it behind. I tried to reach and pull strong and not think about the trailing boat catching us, and as we got near the finish here came Doug/Sabine again, heading down-course one more time. "Go boys! You're almost there!" they called to us.

We kept paddling and hearing the other OC2 then suddenly we were at the buoy and across the line and done!

From up on the bluff Melissa called out, asking if we'd seen Rob. I told her I hadn't, but wasn't looking for him either. (He and she were doing a relay and it turned out her OC1 had started coming apart and Rob hadn't shown up as expected -- Doug/Sabine were headed out to look for him. It turned out that Rob had had to swim the boat in after 2 2/3 laps.)

We drifted, enjoying having finished our first OC2 race, having paddled longer and farther than either of us had ever paddled before in an OC2. It all felt good. And then when we started for the beach I saw Marnie and the girls sitting on a log there, smiling and cheering.

That was the cap on the day. A wonderful way to be greeted at the end.

Here's how we looked after coming across the finish line: 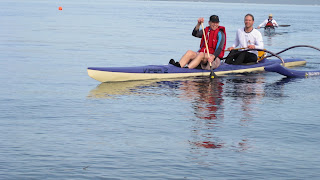 And here, for informational purposes only, is the track that Doug/Sabine took. Ours would look similar, but not as fast:

The thing that pleases me about these is that 1) we were nice and regular, and 2) we negative split the last 2 laps. Nice work guys!

This writeup is so cool. I don't know anything about OC2s, but I felt like I was out there with you. Cheering you on. So cool that you did this and that you had a kick ass time for the whole ride.