(backstory: early morning, still dark out, birds just waking up, K&M have been up for some time now. L&I are still abed, sleeping hard....)

M (actually spoken): Really? You know it's not nice to say something like that to someone. If you don't think they look good, you shouldn't say anything about it. Why don't you think I look pretty?

M (tempted to say - note: speculative): I know. It's early, not even 5.30 yet, but I had to get up because you were awake and wanted to come downstairs and I was hoping to let your daddy and sister sleep a bit longer in hopes that they don't catch the same cold you've got and are now giving to me. 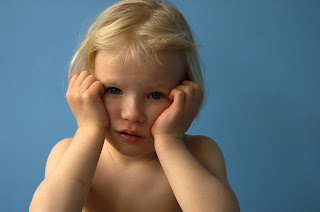 K, still waking up
(maybe you should have stayed in bed longer...)
Posted by pvz at 4:34 AM

I have a great video of this conversation last summer with Austin: