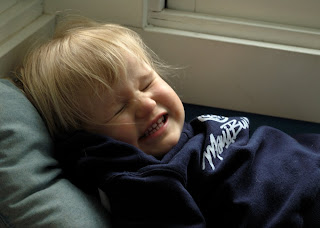 L as Carol/Lisa
(awaiting her wakeup call)
It's now been nearly 4 months since Christmas, when K was given a 3-disc set of the first Saddle Club season. That season and set consists of 26 separate episodes. The girls now watch 2 episodes a day, nearly every day (the only exceptions are when we've been away for the day (out at the coast for example) or they've lost the privilege (due to behavior for example).)

If you're willing to do the math, you might realize that this means they've watched around 100 shows. Divide that by 26 (or, because I'm lousy at math and lazy too, 25) and you can see that, on average, each individual episode has been viewed approximately 4 times.

So what? Who cares?

Well, we do, because in addition to the concern about too much screen time, we've had to incorporate several of the S.C. plot lines into our daily lives. And this means, among other things, that M and I have needed to learn our parts.

For instance. In episode 5 ("Horse Shy") Lisa has to learn how to canter in order to save Stevie and Carol (who have, improbably, fallen down a cliff and are holding on for dear life in spite of the very odd looking rain pummeling them). So, Lisa climbs up on Patch and says....

They gallop away to get Mrs Reg (sometimes played by M, but also sometimes played by K -- one aspect of our reenactments is that they frequently involve ad lib action and changes of narrative direction, keeping us on our toes) who proceeds to rescue the girls by tying a rope around her waist and having Lisa lower her down the cliff by walking her horse forward, wrapping an arm around each girl and being pulled back up.... (we're not exactly talking realism here).

M&me (drinking espresso/reading the paper/wondering why we had to get up so early): This is it Patch!

We might go through this episode 5 or 6 times on any given morning.

Another popular scene involves Lisa falling from her horse while attempting a jump beyond her skill level. She's doing this as a wedding present for Max and Deborah, but ends up in a coma which puts the wedding on hold and results in a cliff-hanger as the second-to-last episode in the season. (The final episode has Carol/Stevie think to bring Prancer to the hospital window where, neighing, he (? K would know, but I can't remember) wakens Lisa and then the wedding can go on as planned. This takes about 24 minutes to resolve itself. Our version takes about 30 seconds, which from parental perspective, is a huge benefit.

K/Lisa (falls off Prancer, conveniently w/ "oxygen mask" in place, eyes closed)
Note: If we don't notice this, there's usually some kind of noise made to attract our attention)
L (falls off her Prancer).
Note: If we don't notice, there's usually a "Daddy, I Lisa!" yell.
me: Oh no! Rider down! Are you Lisa or Veronica (who falls off a horse in an earlier episode but doesn't lose consciousness).
K: Lisa!
L: Lisa and Carol!
Both move to the window seat a hospital bed for convalescence.
Note: when I'm feeling particularly engaged I sometimes will lift and carry them to the hospital.
M (as Carol/Stevie): Lisa, wake up! The Saddle Club is three of us. We can't have a Saddle Club without you. (no response, or possibly L peeking out of squinting eyes)
me (as Carol/Stevie): Remember all the fun we've had!
M (turning the newspaper page): Wake up...
K/Lisa (lies with eyes closed)
M (as Stevie): Max, let's bring the horses in to wake them up!
me (dragging the two horses over): neigh! neigh!
M (as Deborah): They're waking up! Now we can get married!!
me: No more living in sin! Hooray!

editor's legal disclaimer: this last line does NOT appear in Saddle Club. Nothing untoward happens in the S.C. universe beyond the occasional snake bite or horse-napping (see episode 2, "Work Horse"). 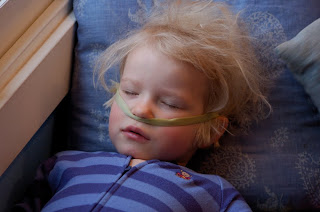 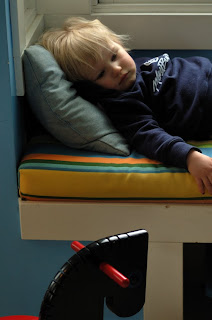 L (as Lisa&Carol)
(Prancer as Prancer)
Note: I'm sure you remember, but in case you're coming late to the game, I've already written about a different scene from the same episode here. Get your lines straight because if you come over you're likely to be pressed into service!
Posted by pvz at 4:53 AM