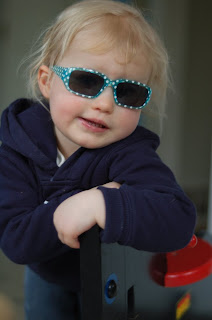 This is what she's begun saying when she wants us to stop doing something (rubbing her back, blowing raspberries on her tummy, singing to her, looking at her.... the usual). Which makes me wonder if we've been listening to too much Tom Petty lately....

Thus, the above shot, in which L appears in her new sunglasses (replacing a pair she broke last summer when, on a stroller ride, she got angry about something and threw her glasses down, to be run over by the stroller. And she'll happily tell you about that if you ask).

I like how she's casually leaning on the head of her horse, approximating K's pose (which is itself approximating Stevie's pose, but I'll save that for another post).
Posted by pvz at 5:48 AM

Let me know if you would like some small (yet very realistic) plastic horses for future photo shoots. If you would like to keep said horses at your house for the next 2 to 3 years, I think that can be arranged...
Maggie