or, Bombs Away, Dreambabies, the that's one cool mother edition:

A couple of days ago, I was busy with... something very important I'm sure. Maybe cleaning the kitchen or making a meal or...? In any case, M was out shopping and the girls were, miraculously, occupying themselves. I had some sense that they were playing with pillows on the stairs, but I didn't hear too many loud noises or screams of pain, so I left them alone to "grow through playing." Or something. Basically, I took  advantage of their being occupied in order to get done stuff *I* wanted to get done.

When I finally did head out into the living room, I discovered a huge pile of pillows at the foot of the
stairs. The girls had started out by using the couch pillows as "sleds" to slide down the steps ("the big splunge" is what L dubbed it, for reasons I can't explain). This activity occupied them for a bit, and they demonstrated it to me, and then them moved on to piling pillows at the foot of the steps and using them as a landing pad. That concerned me a tad (seemed like there were too many chances for bad landings), but they seemed to have it more or less under control, and K at least was being reasonable about how high she jumped from. Her sister, on the other hand, is somewhat of a dare devil. But I was getting stuff done!!! I let them forge on.

Until M got home.

At which point the girls wanted to show her what they were up to. I took the bags of groceries and let the explanation go on unattended (I figured I could explain/beg apologies/justify later, one-on-one with M). And I listened to the excited voices showing off what they'd been up to. And then the jumping/thudding/laughing started up again, and I eased my way toward the living room in time to see: 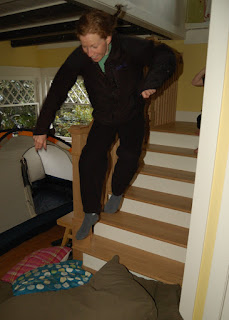 my wife, testing out the new launch pad

How freakin' nutso cool is that?!? 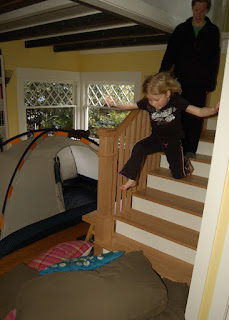 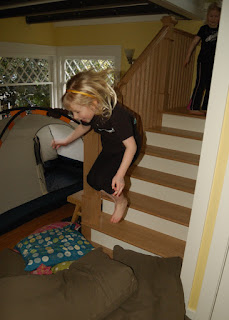 K, with good form
(knees together, smile on her face)