... on the thin ice of...Highland Ice Arena, or, when hell freezes over, sorta.

The girls have been wanting to go ice skating, something I haven't done in years. 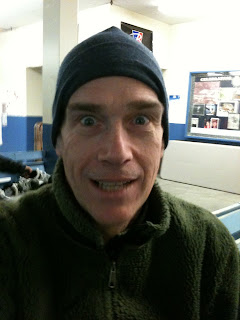 Ice skate? Of course I know how to ice skate!

And for those of you following along at home, consider this - having been born in Hawaii, and not having left the islands for the first time until the summer after my sophomore year of high school, and then only for a 2 week hiking trip in Yosemite, and not again until I went away to college, I wasn't much exposed to ice in general and ice rinks in specific. Until I went away to college, where I did learn to skate, sort of.

But this was 30something years ago, and I haven't been on skates since sophomore year. Which hasn't kept me from trash talking with the girls when the subject comes up between their mother and me.

Let's see, where was I? Oh yeah, the girls have been wanting to go skating, which they imagined they understood from watching a few cartoons on the computer and reading Angelina Ballerina on Ice books. They were sure they would be great at it. And I was sure that I was close to 30 years past my prime skating.

We managed to dodge the issue a few times, and M even said once that we'd look into it. But we hadn't. And this morning while M was out shopping the girls brought it up again and in a moment of weakness I promised I'd see what options there were.

So I actually did it! I opened the MacBook and did a search and it turned out there were several rinks in town and that one had skating from 10-noon and then again from 1.30p - 5p and it was 9.45a and I figured we were probably good for about 30 minutes of painful wobbling, so we packed up* and headed to Highline Ice Arena in Shoreline. 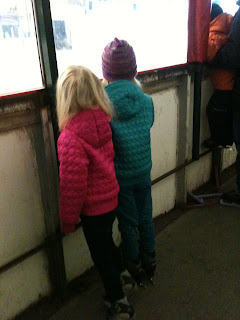 Newly strapped into skates
and watching the Zamboni impatiently

*(note, this phrase doesn't begin to capture the whole of what it means to prepare for something like this. There is the clothing question (L: Is people going to laugh at me?), the snacking question (M: We have to bring them something to eat!), the warmth question (K: I don't have gloves I want to take. L: I don't want to wear a hat!), then let's-just-get-the-heck-into-the-car question (me: Why did we think this was anything remotely like a not horrible idea?!?) but I won't go into that.)

But we badly needed to get out of the house, and it was dry and cold and the Seahawks were playing in the playoffs on TV so I found myself tying on skates for the first time since 1979 and muttering to M that "This falls into the category of 'never in a million years did I think I'd be doing this!' If I weren't one of those wonderful parents...."

And here's the thing - the girls had a blast. And we did too, more or less (sore muscles, sore knee).

They couldn't stay up by themselves of course, but we got onto the ice at 11a, just after the Zamboni refreshed it (see above photo), and it only took us until 11.23a to make a circuit of the rink. Seriously.


I took K while M took L, and we muddled along, the 4 of us, keeping more or less together. K was wobbly and stared down at her boots. At one point I heard M tell L to bend her knees and that seemed worth telling to K as well. I also noticed how she was focused on her feet and told her to look forward, and after this she did fairly well in terms of keeping her balance. We slide together and apart, sometimes pulling one another toward the ice. She fell more than once, while I managed to keep on my skates. Eventually she seemed to
find her balance, more or less, and we did fine.

When M and I traded girls, I found L tended to flop, expecting me to hold her up or catch her when she slipped, and she didn't seem to do much to avoid this when it happened. (Which, when I think of it, is not so different from how she lives the rest of her life.)

Occasionally M or I would ditch the child we had and take a turn around the rink to work the kinks out, and then we'd reattach.

I was pleased to find that 1) I could still skate, sort of, and 2) my balance practice while brushing my teeth (standing on one foot) seemed to have helped. I felt fairly stable, with the biggest issue (other than 45 pounds of flailing child) being that I'd never used skates with toe picks before, and at times I found these catching in the ice.

M, it turns out, had last skated when she was 7, and then only once or twice. I'm glad I  didn't know this beforehand, or I'd have really been talking smack and, as a result would have really needed to eat crow. She was, by a goodly margin, the best of our foursome.


After that, we got into a grove and started moving at speeds of up to 5 minutes per circuit. We're talking wind blowing through the hair speeds!

And around 11.40a we started taking the girls one at a time, holding them between us and skating around in about 30 seconds. They loved it. They were wobbly and slippy and imagined they were doing fantastically. L loved the speed. (Sample conversation: K (as I pulled her up after a fall): That was bad, but at least no one was around! me: I'm glad to see you fall. Those kids over there are falling because they're learning. That's how you learn. I think I probably fell maybe 40 times an hour when I was learning. K: Well, I probably fell about 4 or 5 times today. me: Yeah, probably.) But they kept wanting to continue. The biggest issue with this approach was that it meant one of the girls was waiting for her turn.

By the time noon rolled around, neither of the girls wanted to leave. L had to be dragged off the ice. And K skated with me to the door, her other arm out, pretending that M was holding her on that side. And they both felt it was a huge success. 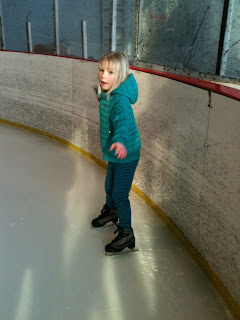 Our drive home was dominated by discussions about who was the best skater in the family, which skater at the rink the girls liked best, why there were leggings that went below skates, what the covers were that the "real" skaters put on their blades.... the normal post-skating conversations. And at dinner tonight when I asked "who can tell me some of their favorite things from today?" K's hand shot up: Ice skating! L's hand shot up: Ice skating and watching the movie*. M: I'd have to say ice skating too. And the movie. me: Ice skating, the movie, and my walk with L to see the secret staircase."

Not so long afterward, Miss L fell asleep before reading was finished, and we all were exhausted. All in all, a successful day, I'd say.

*note: we watched The Princess Diaries for family movie afternoon, and I think it was over L's head, but K enjoyed much of the slapstick of it, and when we mentioned that the "queen" in the movie was the same woman as in Mary Poppins, her eyes got big as she tried to process that information. And of course M and I both teared up at the end, and K felt "embarrassed" which is a fairly typical reaction for mer, and something I'm still working to puzzle out, but I suspect means that she felt emotional as well, though we're still trying to sort that out.
Posted by pvz at 10:07 PM