Well, it's foggy and roughly 39, with a "feels like"value of 20 degrees below you've-got-to-be-kidding! Shorts? Uh, no! 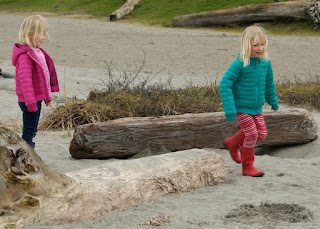 Start of a barrel race

M heads off to work, both girls are still in jammies and I'd like to take a shower before we go. I figure it'll take us about 45 minutes to get out the door. I'm wrong by a factor of 2. But I hadn't calculated in the total meltdown related to socks and bleeding into no good shirt to wear, exploding into Miss L pulling every single carefully folded shirt out of her drawer to throw down in a mess on the floor because one of them wasn't still folded like she and M had folded it yesterday (which was the first time I'd ever seen that drawer look like anything other than a pile of mashed laundry). I helped her refold and repack the drawer, where "I helped her" = me doing it while she wailed about not having the right shirt or the right socks or... I sort of stopped listening at some point soon after all the shirts hit the floor.

And here's the thing. I can handle the wailing, the meltdowns, the "You don't love me"s and I'm willing to refold laundry that I would never have folded in the first place. What really gets me is not knowing whether I'm enabling behavior that I don't want to encourage. If I knew that putting up with Tropical Depression L meant only that we'd grow out of the behavior in time and all will be well, I'd happily (?) do so. But I worry that I'm only making things worse by putting up with it, or comforting her, or....

I'm fairly certain that I've been through this line of anguish before, so maybe I should just shut up. But it's the not knowing whether I'm making things worse, or just easing us on toward more grown up behavior that really challenges me. And I feel fairly certain that I could find books that argue positions 180 degrees in opposition to one another.  So I stew. And we head to the beach.

I go down to the beach with 2 girls, and return with 2 wild horses I captured there. Not unusual if you know our family.

It was a given that they'd be horses. We speculated on the state of the tide, with K certain it would be in, and L saying that "maybe it won't be." It was in. But there was still enough sand to gallop on.

First we set up a barrel race course: 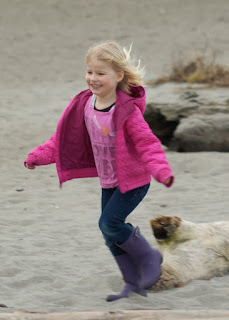 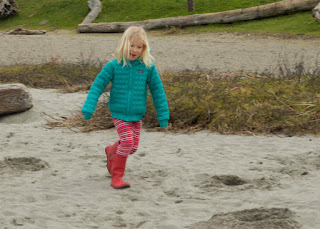 (those gopher-like holes in the sand are the "barrels")

And the girls ran the course a few times. But then fairly quickly the game morphed.

L: Pretend I'm a wild horse, right?
K: Yeah, and I'm a wild horse too, and you're the owner but you don't know us but you catch us....
L: Yeah, you catch us (piercing neigh which, in better weather, would have drawn at least a few curious glances) and we're wild and my name is Picasso and...
K: ... and my name is Steps Lively.
me (hands reddening in the bitter wind): Ok.
both girls run away from me and the barrel racing course.
K (over her shoulder): Daddy! You have to catch us!
L: Yeah, you have to!
me (loping slowly after them, wondering what the windchill is and how L can possibly stand to have her coat unzipped): Ok, swish swish.... I'm throwing my rope. Got you!
K&L: (loud neighs and stomping feet)
me: And I take you into the stable.
K: Yeah, and you feed us.
L: And pretend we know where the stable is, so you let us go.
me: How do you know where it is? Aren't you wild?
K: Well... we came here before, when we were with our band.
L: Yeah!
me: Ok, click click.... you're loose.
K (running ahead to the "barn"): And I go into my stall.
L (following closely behind her): Yeah, and I go into my stall....
me: And I close the door behind us because it's getting colder.
K: Pretend I can tell there's a blizzard coming but you don't know it and so ... (loud neighing and pawing at the ground)
L: Yeah, (neighing and pawing)!
me: Uh... ok. And I get you back into the stalls and close the bar up tight because, wow, that wind is howling now!
K: And I see some hay and I like hay so I jump out of my stall and eat it (moves past the line drawn in the sand by my boot heel and over to the bush)
L: And I do too (leaps over her stall "door" and stands beside her sister/horsemate)
me: And pretend you don't see the dog poop next to the hay.
K (sharp glance up): What?
me (pointing): There's dog poop there. Don't step in it.
K (gagging): Aaack! (moves away) And I go back to the stall....

This more or less captures our 40 minutes of "fresh air" and I like to believe the time offsets the 60 minutes of Martha Speaks they watched after we got home (me driving wild horses in my "horse trailer" made by Chrysler).

And this evening, though we had more melt downs because M was putting neighbor children to bed down the street and that meant one reader for the two girls, I managed to get 3 books read to L and then moved onto The Long Winter for K while L curled in protest against me until she was breathing hard and regular and her fully asleep weight rested hard and wonderful against my right side and it was all worth it, as long as I'm not making things worse, but how can I possibly know....

One last picture, this one from the morning, waiting for breakfast: 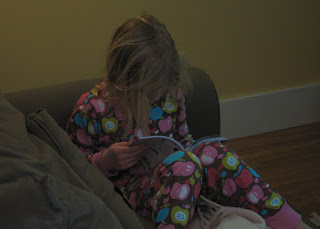 Reading Ivy and Bean on the couch

We have an arrangement now. The girls have a clock out in their room, and they're not to get up until 6am. Some mornings we hear them whispering to each other at 5.15. Other mornings it's clear that K has woken her sister up. Yesterday for example, which was an early morning after a very late evening. So I told K that this morning she was not to wake L up, and that if she was awake at 6a, to come and get me and we'd read together downstairs. So K came nearly silently into our room at 6:01am and she and I slipped down to the basement to read The Long Winter until the others were up.

And I'll be honest - I don't mind these mornings of reading together. Even on those mornings when I could use another 30 minutes of sleep.
Posted by pvz at 9:52 PM