Or, how we managed to make a bad situation worse and then possibly better but we won't know for a minimum of 3 months and it could take up to a year. 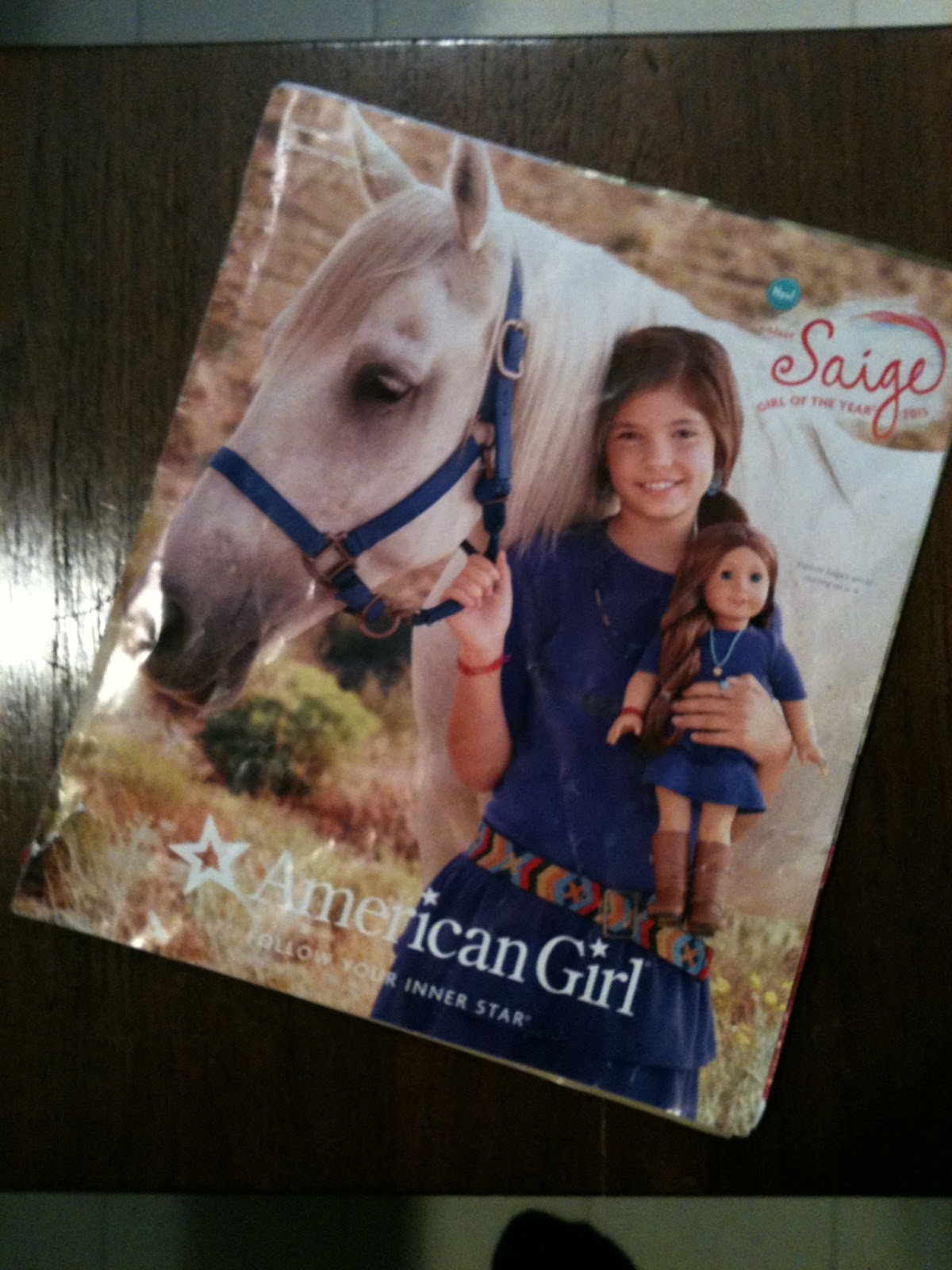 Meet Saige. Get to know her. She'll be around a while
(unless she's not)

Recently (this last Christmas) our girls started being aware of American Girl dolls. Friends got them, catalogs ("magazines" in our household) arrived unrequested. We'd generally maintained a low profile on things American-Doll-related (not to mention Barbie, Disney and other over-marketed consumables. But the reality is that we live 1) with girls, and 2) in a world where information cannot be entirely controlled. Thus, we're now moving into the era of princesses and expensive dolls. And I'm going to do my best to, if not embrace it, at least accept it with something vaguely like grace (I hope).

So, in spite of our previously stated position that AGDs are for 8 year olds or older, we're now anticipating getting a couple of them in the next year. Here's how it's all gone down (so far):

1) Friends and cousins got AGDs for Christmas/Birthdays/etc. even though they weren't yet 8yo.
2) K&L noticed this.
3) M and I realized that we might need to capitulate on this age-line-in-the-sand
4) M came up with the idea that the girls could "earn" AMDs by giving up sugar.
5) K&L both thought this was a great idea.

Remember that K is not yet 7, but is quite reasonable and can look ahead and delay gratification, and that Miss L is only just 5 and thinks delayed gratification means waiting for 3 minutes before getting exactly what she wants.

The first plan M pitched to the girls was that, if they agreed to give up sugar for the year (2013), they would get AGDs for Christmas. Both girls nodded enthusiastically and said they were in. There were some contingencies - sugar could be had at a school birthday celebration, for example. But Easter candy, Halloween, these were out. Nods of agreement.

Later that same night, sitting in bed and having what approximates an in-depth conversation these days, M and I discussed "the plan" and the pitfalls it might contain. For example, it struck us both as problematic that a single slip (a lollypop at the doctor's office, say) would negate any effort the girls had made up to that point. It was an all-or-nothing sort of plan, which didn't bode well for any of us. So we come up with a modification.

The next day we laid out the new plan: For each day the girls did not have sugar, they would earn a point. When they'd earned 300 points they would get an AGD for Christmas from M and me. Again, nods of enthusiasm. We explained that this meant they could slip up (have sugar on a particular day) without ending the deal. (K: Oh, so it just means it takes a day longer? me (thinking "holy cow, this girl understands it better than *I* do!"): Right! Exactly! L (clueless, methinks): Ok!!)

Later that same night, again in bed. me: Do you think they're going to be able to do it? (M: I don't know. I have my doubts. me: Doubts! But I was amazed that K understood so quickly. M: L had no idea what was different. me: No idea!) Somehow we came up with another iteration of the plan: The girls would earn points for each day they went without sugar. Once they earned enough points to qualify for a doll (1pt = 1$), they'd get a doll for Christmas.

We explained this new twist the next morning, and again the girls were in, though I think by this time K was wondering why the ground rules were constantly changing. And I don't blame her. It's one thing to come up with a bad plan. It's another to keep modifying it. But at least (theoretically) we were improving her chances as success.

It might have been that night or another, shortly later, when M and I made another tweak to the rules:
We would promise them each an AGD for Christmas (no matter what, even if they started having soda on their CocoSugarBomblets for breakfast). They'd get the dolls. But all the accessories - those were what they were earning their points for.

You see, one of the points that we've struggled to get through to L was that even though each doll is shown in the "magazine" with scads of gear (canopy bed, jodpurs and polo mallet, vespa scooter, sailing yacht), each piece comes separately, at significant cost. And of course the girls wanted a lot of what was shown.

The next morning we told them we were ready to promise them AGDs for Christmas, independent of their sugar intake. I thought I saw a glimmer in Miss L's eye. She's inherited my achilles heel sweet tooth (to mix a couple of metaphorical concepts). We sat down with the girls and explained (again) that the accessories aren't actually included with the dolls but are purchased separately.

And once more, they agreed. I could see K looking askance at us, probably wondering what would change next. But she saw the benefit of the latest system and agreed.

Almost a Month In

So we've been proceeding with this variation, and so far things have gone well. The girls have amassed 20 or more points each, with L (shockingly) having not caved for sugar once. There was a night, a few days ago, when she pronounced herself willing to give up a point for that day, so she could have something out of her candy bag. M pressed her, asking if she really wanted to do that. She insisted she did, at least until I reminded her that she still had some vitamins to take, and, glory of glories, the calcium they take is a chewable, sugar-dusted gummy bear. Candy in other words. L: So that doesn't count? me: Nope. L: I want my vitamins!

Then last night K said that she wanted a piece of candy instead of a point. L: Then I'm going to get my American Doll before you! K: Yeah, but probably just a day before! L: I want my vitamins!!

K had her candy, L had her vitamins (she splits them between morning and night whereas K has been taking all of them in the morning, something she just changed this morning, seeing the wisdom of her sister's ways), and now L is one point ahead of her sister.

Besides the time between now and, say, April, when the girls could theoretically have enough points for a doll, there's an issue of which doll. The girls spend many many minutes reading and rereading the "magazines," noting what comes with the doll, and which pet they want, which bed, which.... All of this is fine, except that L, for the time being, wants Saige (see picture above), who happens to be the 2013 "doll of the year." And these dolls of the year have a tendency to sell out. And these girls of ours have a tendency to change their minds.

So we could buy Saige ahead of time, anticipating the moment when L will have earned enough points to get her. But if, between now and then, she changes her mind (L, not Saige - I have my doubts about just how much "mind" Saige comes with), we're left with an unwanted doll of the year.