It's "interesting" being a parent. Always interesting.
We get the opportunity to watch our children learn and, even more "interesting," we get the opportunity to learn ourselves. Often the things we get a chance to learn are things we either thought we'd learned earlier, or should have learned earlier. I find myself regularly learning things that I've already learned. As I said, "interesting!"
One lesson I regularly relearning is the importance of flexibility.
This is a biggie for me, probably because I'm not inherently flexible. I wish I was. It's one of the personality(?) traits I find myself wishing for. Some people seem able to adjust to shifting circumstances without a hesitation or a hitch. They just sidestep slightly, twist a bit, roll with the punches, and somehow reorient for the new realities. Me, I tend to remain planted with my expectations, even though these are often now irrelevant given the revised situation.
All of which is pretty vague and general, so you may have no idea what the hell I'm talking about. Here's an example, from this morning:
The alarm goes off at 6a. M is going to go running. But instead, she hops out of bed, turns off the alarm and comes back under the covers. I'm drifting in and out of consciousness, but I know she's gathering herself to actually get up. L helps her by waking up a couple of minutes later and calling for her. M gets up, brings L back, and tucks her in beside me, saying "I'm going running. You snuggle with your dad."
L and I lie there for about 10 minutes before she says "Dada, I want to go downstairs." I say, "Ok" since my plan is to get up anyway and make oatmeal so I can get out of the house by 8a. She says "Thank you Daddy." (!) And we make our way downstairs with the beast.
We're dog-sitting at the moment, so there's an auxilary dog in the kitchen. L wants to take off her diaper. We go down to the basement to get some underwear. Then back up to the kitchen, where L decides she wants tights too. Back down to the basement, dig through clean clothes - no tights - dig through dirty clothes until we find the pair she wants. Back upstairs to the kitchen where I find that one of the dogs has thrown up and due to the slope of our 100yo floors, things have ...drifted... out of sight beneath the "frigerator."
The next 20 minutes are spent with old towels, papertowels and, after moving the refrigerator, the vacuum. I was going to need to vacuum behind there anyway. And we found some magnets that had ended up under the fridge. (L: "I did that, Dada. I pologize." me: "That's ok L. We shouldn't put them under there." L: "I know Dada.")
Dogs are milling, oatmeal isn't started yet, L still needs her tights put on. I start to put on her tights (an aside - I never understood the whole gathering up the leg to the foot, then sliding your leg inside until I had to learn to put tights on the girls. Now I get it. I think of... maybe Mrs. Robinson*... every time I do it, and I get the necessity now.) and I hear K now, waking up in her bed. We finish with the tights, head on upstairs, gather K too, and after various morning chores, we head back downstairs where dogs are still milling, the refrigerator is still pulled away from the wall, and the vacuum is still in the middle of the floor. I'm finishing up as M walks in from her run.
I look at her: "One of the dogs threw up, I think Lucy. So I haven't gotten anything done. No oatmeal made, no lunch for K, nothing."
L: "It went under the fridgerator and there were magnets and it was really dirty!"
K: "I just got up."
M: "Wow...."
So I'm flustered, and haven't made or eaten anything, and next, K decides she's going to be a horse. Which means that everything we do/say needs to be directed at her as though she's a horse. No, "What do you want to eat?" It has to be "What horse food do you want to eat in your stall?"
It's not a big deal, right? But it's just one more layer of complication on a Monday morning that already feels somewhat more complicated than I'd planned. The simple solution is to play along, to be her "owner" and nudge her to come upstairs and get her "horse blanket" on so she can go to "horse school." And often I'm able to do this. But there are moments at which I balk. I just want to be able to say "You're a kid. Go get dressed!"
Which is entirely counter-productive. It's absolutely the worst thing I can do/say.
Having M there helps. A lot. She sweetly asks K what horse food she wants in her new thermos, and K tells her. Things move smoothly, whether we're horses, horse owners, children or parents. And I'm reminded that being able to go with the flow is key to keeping the flow moving.
All of which is a long intro to what I'm thinking about this morning, which is that I know none of us is perfect, or perfectly balanced, but I think I got lucky with my mom. 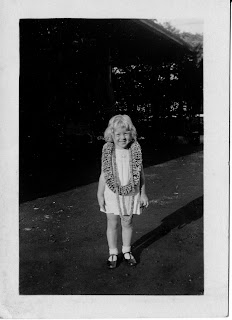 Mom, Honolulu, 10/24/31
I think she's done a great job of being a mom over the years, and as I get deeper into this parenting stuff, I realize more and more what she and Dad had to do and managed to do, and my appreciation grows. And as it's her birthday, I'd like to wish her a happy day, apologize for those mornings when I insisted on being... whatever it was I insisted on being (a cowboy? a dog?), and say:
Thank you Mom, for everything.
A couple of photos, to finish off with.
One of Mom with her parents: 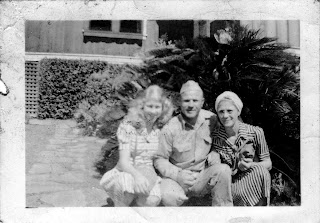 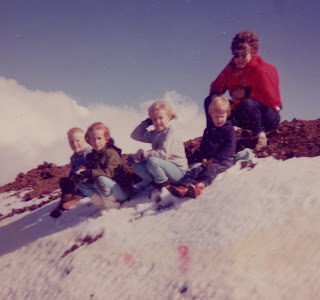 I thought it funny that you dug through the dirty laundry for tights for L. My first thought was K would never accept dirty tights. :) Learning to go with the flow is a tough lesson, I've gotten better over the years. I like to have a plan, even if we deviate from it, I like have a starting place. Maybe it's the inflexibility that makes me grumbly on sprint race days trying to fill out registrations. - Melissa