in which you learn that L's parents pee in the grass (sort of)....
warning: potty talk within!
Prelude - the accident:
Last week L had a fairly... significant "accident" while at her daycare. When I arrived to pick her up, she was wearing replacement underwear, pants, and was shoe/sockless. Apparently everyone was outside and she peed, in such quantity that it drenched not only her skirt and tights, but also her shoes. So, I was carrying both L and a plastic bag of her soggy belongings to the van when we left.
Main event - bathroom freaking:
K has developed a concern regarding bathroom activities recently, where "recently" = about a month or so but I can't remember exactly due to sleep deprivation.
This concern exhibits itself in a variety of ways, including insisting on wearing a diaper to bed in spite of being entirely potty-trained, and waking up multiple times throughout the night to pee (thus, the sleep deprivation I mentioned). At the height of its craziness, she got up 5-6 times a night, sometimes within 15 minutes of the last time. By morning I was a mess. I didn't want to make a big deal about it, figuring that the bigger a deal I made, the bigger an issue it would become. But finally I sat down with her one day and said that I couldn't keep getting up so often at night, that it was making me sleep-deprived and that I was getting crabby as a result.
Did she understand? I'm never sure how much of an effort at reason and logic it's worth making with a 4yo. But, she said she understood, and in the weeks since, she's reduced her wakeups to between 0 and 2 per night. Still not my ideal, but muchMUCH better than 5-6 times per night. Usually we get up once. Often not at all, and occasionally it's 2x.
It wasn't only during the night, either. During the day she'd frequently head back to the bathroom 4 or 5 times in an hour. At least then, she was in underwear and on her own as far as taking care of business.
We even took her in to the doctor to make sure there was nothing going on like an infection. She checked out clean and healthy.
The other area her concern impacts is going places. She can't (or won't) articulate what it is that worries her about it, but there are times when she flat-out refuses to go somewhere (a playdate, to dinner, to someone else's house...). The best I can figure out is that it's related to her concern about going to the bathroom.
We nearly had to bail on a dinner date with a friend last week because after K went to the bathroom one last time before climbing into the van, she seemed to register that we would be at a restaurant and that the facilities situation was a huge unknown. And the only thing she could say about why she didn't want to go was "Because!"(admittedly, she was near-hysterical, so I wasn't going to get much out of her anyway)
A side note, to remember for future similar situations: the way I got her to change her mind was to walk away, go outside, lock the front door (it doesn't latch unless locked), and go talk to M who was waiting in the van with L. My thinking was, one of us could go to dinner with L and the other would stay home. In the meantime, K apparently thought I was just leaving her abandoned at home. She came screaming downstairs and stood pounding on the single pane living room window and M and I hurried back and unlocked the door at which point she was yelling "I want to go! I want to go!!" Problem solved. I suppose. Not quite the way I'd envisioned, but solved.
And here's the other thing about this sort of meltdown - then she was over it. We buckled her in and backed out of the driveway and hit the West Seattle Bridge and in spite of tear-streaked cheeks, K was ready to ask things like "Dada? Why that car have blue lights?" and "L, am I the best sissy you ever had?" In the restaurant there was no expressed concern, she drank gallons of lemonade, and needed to go to the bathroom just once.
But damn it, it's hard, when I'm still brooding about the chaotic exit we just had, to switch to info-daddy mode: "Those are special headlights K." "Of course you're the best sister she's ever had. You're the only sister she's ever had!"
Best question from her on the way to the restaurant: "Why we so late?"
M and I just looked at each other and muttered something about getting out of the house later than planned.
Postlude - just like you!:
Luckily, L doesn't seem to have the same hangups (yet?). She had no concerns about the accident she'd had at Miss Ronda's.
me (once the family was gathered over dinner): I started a load of laundry. Help me remember to pull it out before I go to bed.
M: Oh?
me: Yeah, we brought some wet clothes home from Miss Ronda's.
L (full of excitement): Yeah! I was standing in the grass and on the dirt and I had an accident!
M: You had an accident at Miss Ronda's?
L: Yeah! (smiling and nodding now) It was pretty big accident!
me: Yup, even her shoes are in the wash.
M: Wow.
L (proudly): Yeah. I peed outside in the grass. Just like you and Daddy.
M and me: !!! 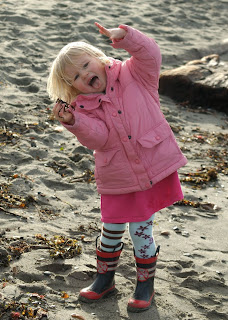 A short note of explanation: We didn't pee in the grass. At least not the time to which she was referring.
We'd told the girls a story about how even adults sometimes need to pee when they're out and about. In this particular (true) story, we were caught in a snowstorm, pre-kids, and the West Seattle bridge was shut down. We'd been in traffic for a loooooooong time and were going nowhere and it was dark and blizzardy and probably after 7pm and eventually we just pulled off into a deserted parking lot south of the Home Depot on First.
The motivation for sharing this with them was to help calm fears about needing to go when there's no bathroom around. As a parent, you're always reassuring your children that, "Yes, even adults feel that way" and "Even adults sometimes make mistakes" and "Even adults sometimes need to pee when there's no where to go."
I'm not sure the story made an impression on K.
I'm certain it made some impression on L, though I'm not certain exactly what.
And as for Miss Ronda, who knows....
Posted by pvz at 10:50 PM

Feel free to tell them that their cousin has also peed outside. In fact the most recent time was on a hike on Maui. I actually felt fairly accomplished that I was able to do it, since I hadn't since I was little.