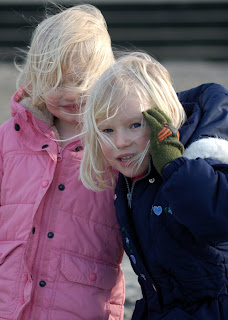 On the Beach
(alki beach, 1/16/11)
Yesterday, on the spur of the moment, I decided the girls should come down to the beach with me. It was early afternoon and overcast and somewhat windy, but the air temperature was not bad (low 50s? high 40s?) and they'd been inside all day and all the previous day as well.

M has been talking about how we need to make more of an effort to get the family outside. Which is a challenge when you're talking about adults. Add kids, and things get infinitely more complicated. Still, we both believe it's important and worth the complication.

So I pitched the idea and L was immediately excited about it. K was not so much. There are concerns about availability of bathrooms, and no matter what I told her, she didn't want to go. I'm not sure if she witnessed a particularly traumatic "accident" at school, but this is a sore spot for her. She's not had any particular problem while we've been with her, but she's got her concerns.

To cut to the chase, I told her that if she didn't go, she wouldn't be able to watch "Misty," a movie that I believe M's mother gave the girls for Christmas. Misty is, of course, a pony, which is a small horse, which is the best possible subject for a movie you can ever think of. So the prospect of L going to the beach then coming home and snuggling in to watch Misty while K had to do something horrid like read books or play with her dolly, was too much. She caved. (As an aside, I can't even remember back to a time when I might have felt using that sort of temptation/leverage was a bad thing. But I know I probably did think this. No longer. Anything to get the girls out of the house and into some fresh air in January!) Which was great.

Because we had a blast.

The sun came out, the waves splashed at the shoreline, rocks were thrown (and gathered into my pockets for show-and-tell), and seaweed examined. 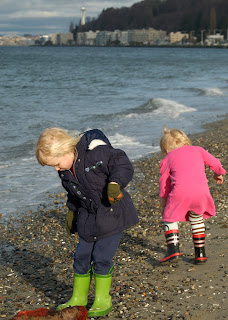 Looking for that one special rock
(L, with her coat off - she took it off as soon
as we hit the sand.) 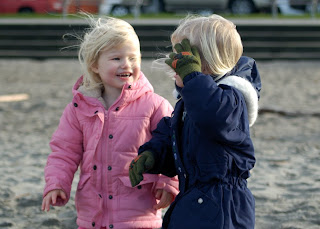 sisters
and a shared laugh
Which is to say, it was a near-miracle.

The last time I tried this, M was down in California and I was solo with the girls, and we pulled it off but just barely K didn't want to get near any seaweed and she thought it tragic if I threw a rock or stick in the water. ("Uh, K, what do you think the rocks and sticks are for?" "No! Daddy, no!!") There was freaking out about sand in boots, on hands, on pants.... and we retreated after about 30 minutes.

I expected we'd be good for 30 minutes this time too, but it was warmer and I had to coax the girls back toward the van.

They really took to the beach and had a blast throwing rocks and picking up odd looking seaweed and getting close to the water and running and pointing at seagulls and watching ferries and pushing their hair out of their faces. M says it's because the last time they were at the beach, they were with their older boy cousins, and as we all know, rocks and sticks and seaweed and boys make for some good fun. Whatever the reason, it was a ton of fun for all of us, on top of being therapeutic.

To top off the excitement, there were even some good puddles to splash in on the way back to the van. 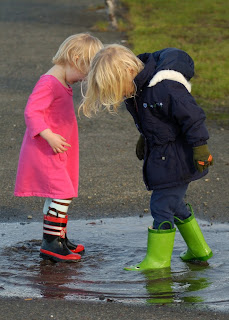 Puddle jumping
(on the way back to the van)
And it was good.
Posted by pvz at 4:45 AM