Ok, it's in the blood, this horsey thing. I think we're screwed. And here's some photographic proof from my side of the family:

(note: M's mother also loved horses, rode, and had a horse of her own until he had to be left behind on a move from Tennessee (?) to Florida)

1) Grandpa Biddle -- joined the cavalry at ~16yo after lying about his age and knowing how to ride. He learned: 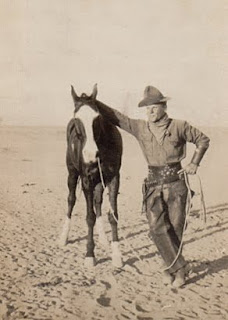 somewhere out west -- doesn't
look like a kid from the slums
of Philly, does he?
2) Grandma Biddle -- had an uncle who was alleged to have led several wagon trains west from somewhere like Missouri to California in the 1800s. Family lore has it that he once escaped from an attacking band of Indians by riding hard and jumping a creek or riverbed, but only after at least one arrow passed through his flying coattail. No word on the fate of the folks in the wagons (assuming this happened while he was on the job). No photo available.

3) Mom -- loved horses (ok, and dogs and sailing) as a girl, and rode frequently until she left Hawaii for college at Mills, at which point her riding was done at the generosity of other, better off students, and done English. I think she mostly rode western as a girl. 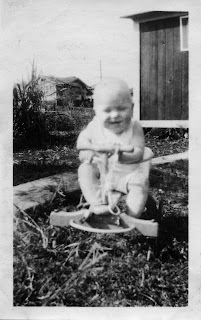 somewhere in Kaimuki
(ok, it's not a horse, but it's the closest thing I've got at hand.)
4) me and my sisters -- we all took riding lessons as kids, and explored the pastures of Haleakala Ranch, loving it. Also spent numerous Fourth of July weekends at the Makawao Rodeo. Also also loved our spring-mounted horses (I'm a little miffed that Karol is the one who got to ride in this picture!): 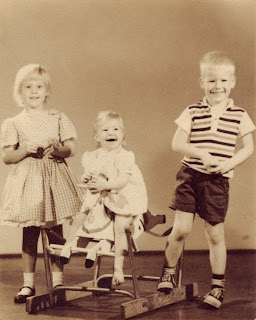 in green pastures of our living room, Puunene
5) our niece -- my sister's daughter has a horse and has been riding since she was a little girl. She's also looked up to with awe by my 2 wannabe horsewomen, and since she's a pretty awesome kid, they could do much worse for role models: 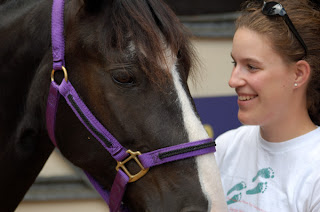 6) our girls -- in love with their horses and with Saddle Club. 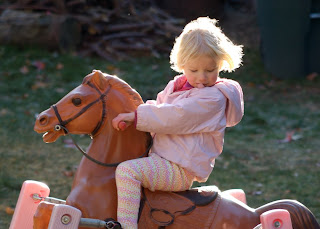 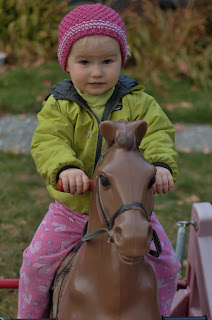 L, looking slightly uncertain
about the reliability of her mount
So, even though the Saddle Club story lines seem to pass right over K's head, I'm afraid we may be in for it....

(Proof that K is missing the nuanced presentations of S.C.:

This weekend we twice watched an episode in which the girls find a lost/abandoned mystery horse and Stevie decides to keep her. She makes the front page of the local newspaper (courtesy of Max's cute journalist girlfriend who's not at all a horsey type and was added to the cast, I'm convinced, to keep us Dads watching).

Final scene of this, part 1 of 2 parts: unknown woman reading the paper and saying aloud "so that's where you've got to." To be continued....

Here's the thing: K has no interest in part 2! I tried to convince her (twice) that we should watch it, but nope, no dice. Instead we watched a different episode (twice), a fine episode, but does Stevie get to keep Belle or not?!? And what about Max and Debbie?.

I've been tempted to sneak down to the basement and watch part 2 on my own.... and I swear it's not (entirely) because of the cute journalist! But that feels like cheating on K (not to mention M). So I'm resisting! I'm resisting!)
Posted by pvz at 4:58 AM