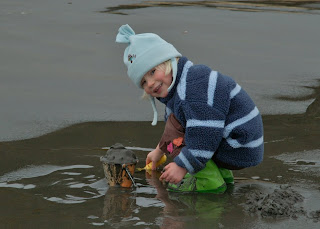 K, with bucket
(Because, who doesn't love a warm sunny day at the beach?)
Back from a weekend at the Washington coast. This is our... 6th? 8th? annual visit to the same run-down beachfront motel house place. And we keep going back because they take dogs. And we have a dog. They also take kids, and now we have kids too. But we had dogs first.

We go with our good friends who also have a dog, but no kids. They don't know what they're missing. Or rather, they do, once they get out to the coast with us. Every year.* Then they remember why they have a dog. They can keep on a leash. And who sleeps on her bed quietly except when she's begging. Our girls don't sleep quietly on their beds. But then they don't really beg either. At least not right there at the table, bumping up against our legs while we're trying to spread brie on crackers. And drink dirty martinis.

This weekend was a full moon, and also the first time we've ever been out there during a razor clam season opener. Which meant that on Friday afternoon as the tide was going out, truck after truck and SUV after SUV drove up the beach and parked facing the water, and men, women and children climbed out wearing hipwaders and other going-to-be-standing-in-waist-high-cold-dirty-water gear. We watched from the house in amazement as the normally quiet beach became more and more crowded.... weird visual here in Washington in January. Lines of folks, like detritus washed up in the surf... 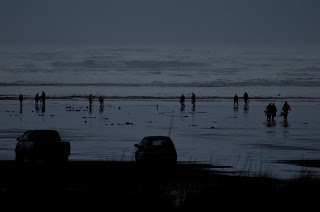 * Disclaimer: They keep coming back with us, so they only have themselves to blame.
Posted by pvz at 4:51 AM