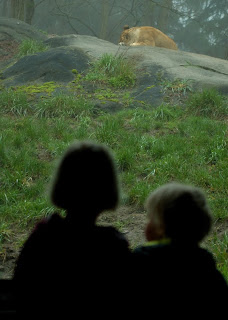 K&L, with lioness in background

Monday, in a traditional attempt to honor our country's various leaders, we went to the zoo. Where we saw some animals and rode the carousel and waited about 20 minutes too long so that the melt-downs began while we were 25+ minutes from the south gate and our car. (K: Van daddy! It a van!!) 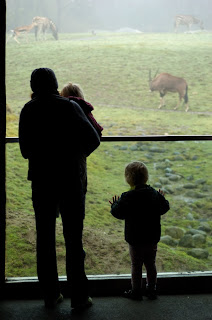 I'm not sure just how much the girls got out of this stop. They both wanted to see the zebras, but once we were there, they didn't seem to be that interested. 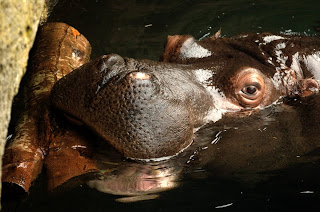 These were more active than I'd ever seen before, and a keeper tossed in this log (seen above) which he said they like to chew the bark off of. For a second or two we thought we might get to see 2 hippos arguing over one bark-covered log, but then the keeper went and got a second log and the excitement was over. 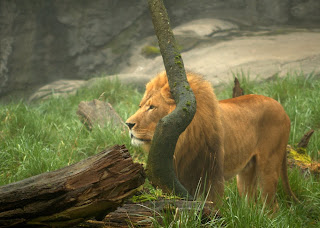 This male was wandering around in the fog, roaring with a slightly cough-y sounding roar, and M and I both stared for a moment, having never seen/heard this before, then turned to each other and said at the same moment, "Hairballs!"

* each horse on this antique carousel has a brass plaque with its name on it. And one horse was named "Bob Dylan." Sadly, K didn't choose this one. I try not to hold this against her. Her one valid excuse is that she can't really read yet. If she could she would no doubt have chosen Bob. The name plate included a quote (we assumed): "I couldn't be anyone but myself. Whoever that is." (rough quote from foggy memory).
Posted by pvz at 4:58 AM