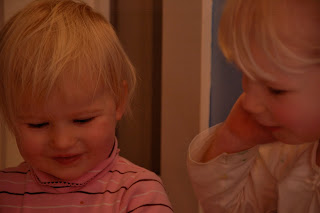 Sharing something fun, December 2009
This weekend was beautiful in Seattle, with sunny cool days and blue skies -- more like June than February, which has me thinking June may be a classic "Junuary" this year. But that's months away and we filed our taxes last night and it was sunny, so things are looking up!

The weather meant that we could all get outside for a bit and blow off some steam, relieving cabin fever that has built up over the course of the winter. "Get outside" meant pulling all manner of toys from the studio to be used for upwards of 5 minutes at a time before being cast aside for new distractions.

At one point we had in the yard:

Eventually K wanted to ride her trike on the sidewalk because our yard is lumpy grass and bumpy gravel paths and so very hard to ride in, but the trike/sidewalk thing wasn't something I was particularly interested in having her do, which makes me a lame-o dad. We live on a street with a slight slope down to a crossing street, and I had visions of her freewheeling (this particular trike will do that) down in front of some passing car. A crash into a tree or a neighbor's front steps would be acceptable, but not the car-trike combo.

Luckily, M was willing (she's so awesome!) so she took charge of K and I followed them out with L riding queen-like in the wagon, also hauling the dog on a leash for a non-walk-walk. And it all went well.

K learned how to put out her feet to stop on the sidewalk when she got going too fast (which for her was maybe fast walking speed), and L enjoyed her wagon ride though she had some firm ideas about where she wanted to go, including down a very steep street to the beach some quarter mile below. I refused, she cried, and we moved on. ("Go Dow-en!" "No, it's too steep." Waaaaaaa!!!!!!!)

K even learned to ride back up the (gentle) grade. Sample conversation early in the learning process:

But all of this got me remembering and thinking about when I was a kid.

When we moved to Honolulu from Maui, we moved from Puunene onto a ridge above Waialae, and in a moment went from a flat dirt road (bordered by an open irrigation ditch) to a cement subdivision road that seemed like it had a 30 degree slope. The steepness of the street was the least of our shocks as kids, coming as we were from a sleepy plantation into the "big" city, but it factored into our lives.

I occurred to me that here I was nervous to have K riding her trike down the gradually sloping sidewalk, and yet as a boy I had no hesitation about riding our wagon down that steep street. I suddenly felt a sympathy for my parents, and for my dad in particular because he tended to be the worrier of the two.

Now, I don't know how steep the street really was/is, but here's an image I stole from Google Maps (what did we do before the "internets?!?"): 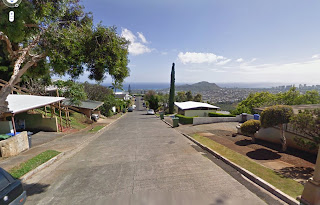 Looking makai from approximately 1996 Alaeloa St.
(our house, 1994, would have been either the
first or second on the right)
You can maybe get a small sense of the angle by looking at the drop along the wall that runs beside the sidewalk. Or look at the garage further down. The edge of its roof is horizontal. And if you follow the street down, you can see where the concrete turns to asphalt. This is where the slope flattened out (before taking a left turn and a further drop to stop sign, after which, it was all down hill to the bottom in a winding, back-and-forth kind of way). It was also where the ride got kind of boring.

Also note, and this is entirely beside the point, the view: That's Diamond Head in the distance, and Waikiki off to the right, and we watched the sun set into the water most nights. Wonderful, right? But it still wasn't our quiet plantation house tucked into a flat, kid-friendly yard in the quiet plantation town on the quiet rural island.....

In any case, here's how we rode the street in our wagons:

It was as simple as that.

And for a kid it was so straightforward and "Dad, come on what are you worrying about?!?"

Now, I'm thinking: What the H#@$ were we thinking? Where were my parents thinking? Can I sue now for poor judgment?!?

On the other hand, we all survived, and I suspect it wasn't a bad experience for us to have.

My big concern as a parent is that I won't be able to give K&L the latitude to do this kind of thing. M is much better at giving them some slack on the rope.

I hope I can get better at letting go. Or at least get better at holding my tongue and hiding my wincing. (I think that's the approach Mom took, as evidenced by my discovery after the fact that she didn't particularly approve of my riding freight trains from Colorado to California and from Colorado to Oregon. But she didn't react so negatively at the time. She asked about it, as if curious to hear more. Dad just gasped and stuttered and I never felt he trusted my judgment. But that's all probably a different set of stories.)
Posted by pvz at 5:04 AM