This morning it was my job to get the girls to Art Camp, which is something they've been doing these last 2 weeks, now that school is over, and which takes place at their school, with some of their regular teachers. Which is to say that there's not much difference between this 2-week summer camp and the normal school day. So you'd imagine that it would be a pretty smooth process, getting them up and fed and dressed and brushed and out the door. But you'd be wrong.

This summer is shaping up to be crazy-busy, with a family reunion in Seaside on the Florida panhandle in 90+ degree heat, a possible trip home to Maui, and several events M is coordinating. Not to mention my work, house stuff, yard stuff..... In other words, it's just one more regular summer season in a line of regular seasons that extend back to last year and beyond, all of which feel crazy-busy. But I'm getting off track.

Summer seems to have (temporarily?) arrived here in Seattle, which means it's been sunny for 2 days now, with temperatures pushing up into the 70s. Soon locals will be fighting for the shady side of the bus and fanning themselves with "Bring Back the Sonics" fliers and mutter about how "we could use a little rain to clear the air." It also means that there's a chance the girls will have "sprinkler play" this afternoon. And it means that, in spite of earlier, well-laid plans, L decided on going to school in a long-sleeved turtle-neck sweater/shirt and heavy "cowgirl" boots. (K wore a sundress.)

I was up against a hard deadline of needing to make it back to the 9.15am water taxi, or being stuck until 11, so I felt relieved, proud even, that I'd managed to get them to the car with few tears and only one bribe per child. I wasn't going to draw any foolish lines at turtle-necks or hot-seeming boots. She'll be fine, or not. M is picking them up this afternoon. 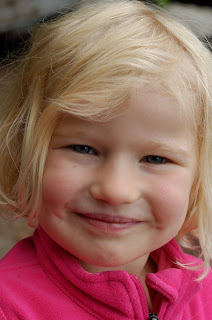 I also managed to get only one of them sunscreened, but it was the one with the exposed arms. The same one who was developing a reaction to sunscreen yesterday. My work here is complete!*

*Full disclosure: M helped with lunches, and breakfast and some clothes selection (though neither the turtle-neck nor the boots), not to mention picking up after at least one melt-down triggered by my anticipating the end of L's question and answering it before she had finished asking. As it turns out, I'd anticipated correctly, so 30 minutes later, while showering, when she came in and asked me again and I finally understood what she was asking over the noise of the water, I was able to say (again) that I'd been born in a hospital and not at home, when I was born on Maui. My point being that as much as it might appear that I managed the entire morning on my own, I didn't.

One of the things I think is the best about you and your writing is that you give credit where credit is due! That, and you're witty & funny (love the image of the people fighting over the shady spot on the bus, fanning themselves with Sonics plaques - that is soooo true).

P.S. I wrote a letter to my boys (maybe just Brennan), and let it sit for over 2 weeks before posting it recently. Big sigh.....

P.P.S. So glad M is doing the work she's doing this summer! We're so thankful for her!